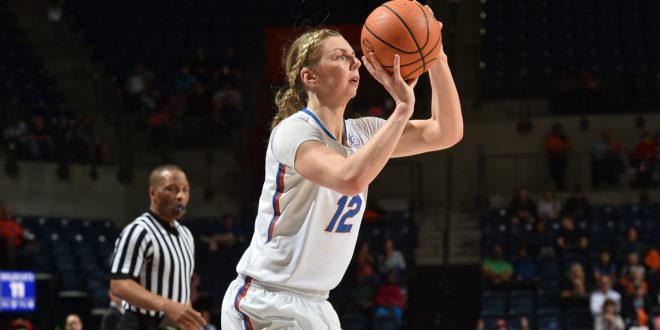 The wait continues for the Gators’ first SEC win of the season in women’s college basketball. It looked as if the wait would end Thursday night when the Gators launched a full-on assault from three point land to start the third quarter, leading by as many as seven. Then, the threes failed to drop in the fourth and Kentucky ended the game strong. The Wildcats ended an eight game losing streak to the Gators, who are on a four game conference losing skid, with a 56-53 win. This loss was another tough one to swallow for the Gators, who can’t seem to put it all together as of late.

Fans were given three-point foam fingers when they entered Exactech Arena Thursday night in anticipation for a three-point showcase. In the first half, the Gators were getting the looks they wanted from deep. The looks were set up by strong passing and most times were clear, wide open looks. The Gators just didn’t convert. Florida ended the first half shooting 2 of 15 from beyond the arc. Both of those threes were hit in the first quarter.

Then, Florida launched a three point barrage in the third quarter. The Gators had a quick six point swing in the quarter’s first minute, thanks to threes from senior forward Paulina Hersler and junior guard Funda Nakkasoglu. The threes continued to fall for the Gators, who made five out of their first six three pointers. This sharp shooting propelled Florida to a 33-26 lead, its largest lead of the game. Florida finished the quarter shooting 7 of 12 from three. For the Gators, Hersler led the team with 19 points on 7 of 13 from the field and 3 of 8 from long distance. Hersler says execution led to her tying a career high in scoring.

Florida’s success from three was a needed spark to a slow game. In the first half, both teams struggled mightily on the offensive end. Kentucky started the game storming out of the gates, leading 11-2 at one point. Florida had another slow start Thursday night, shooting 1 of 9 midway through the first quarter. The start didn’t set them back entirely being that Kentucky experienced similar problems following their early push. Both teams experienced scoring droughts to halfway through the second quarter. This lead to the Gators and Wildcats combining for 17 second quarter points on seven combined field goals.

The third quarter belonged to Florida with their seven made threes. However, Kentucky stayed in the game by countering with key makes of their own. This led to Florida only holding a 39-36 lead when it was time to sway to “We Are The Boys.” The Gator offense ended the game the way they started…sluggish. Florida missed eight of their last nine three pointers. While the Gator offense struggled, the Kentucky offense thrived. The Wildcats shot 58.3% from the field in the game’s final frame, including hitting on five of their last six shot attempts. Gator head coach Cam Newbauer says that mistakes by the Gator defense helped build the confidence for the Kentucky offense.

For the second game in a row, the Gators were forced to go down to the wire. Kentucky guards Amanda Paschal and Taylor Murray hit two major three pointers to give the Wildcats a 54-49 lead with 54 seconds remaining. A layup from Florida senior guard Dee Anderson made it a one possession game with 26 seconds left. Florida resorted to fouls following a Kentucky timeout.  After some missed shots, Florida finally converted on the turnover with a Paulina Hersler put back with six seconds remaining. Kentucky’s lead was cut to one, 54-53. Florida was able to get one final chance down by two. Nakkasoglu put up a step back prayer from three with it going off the mark. Newbauer describes what was drawn up for the final possession and says that he remains confident in Nakkasoglu.

Not Hanging Their Heads

Thursday night was a really tough loss for this team, who still searches for that complete game performance. Coming into this game, it felt like this team would use the momentum gained at Ole Miss on Sunday and come out firing on all cylinders. Unfortunately for the Gators, this wasn’t the case. Newbauer voices his disappointment after another close loss. It would be easy for this team to get down on themselves after dropping their fourth SEC contest in a row. However, this team isn’t wired that way. They have taken each loss as a stepping stone both on and off the court. Newbauer expresses the message to the team, which has been the same all season, when dealing with losses. This message has spread throughout the Gator locker room. Hersler acknowledges the urgency for this team to improve. Lorenzen says that each player much evaluate themselves and remain positive.

Prior to the start of Thursday’s game, Haley Lorenzen was presented a ball to commemorate her becoming the 25th player in program history to surpass 1,000 points. She achieved this feat over winter break in the team’s win over Delaware State two weeks ago. Lorenzen expressed her appreciation of being part of the Gator family. A prime example of the Gator family atmosphere was on full display Thursday night. Gators soccer coach Becky Burleigh was in attendance to support her soccer All-American turned basketball player Gabby Seiler. Burleigh was the one responsible for Seiler joining the team by connecting her star player to the leader of the women’s basketball team.

The Gators are now one of two teams in the SEC who haven’t won a conference game this season. The other team being the 4-14 Vanderbilt Commodores. Florida hopes to snap this four game losing streak as they host LSU on Sunday. Tip-off is set for 1 p.m. Sunday from Exactech Arena.