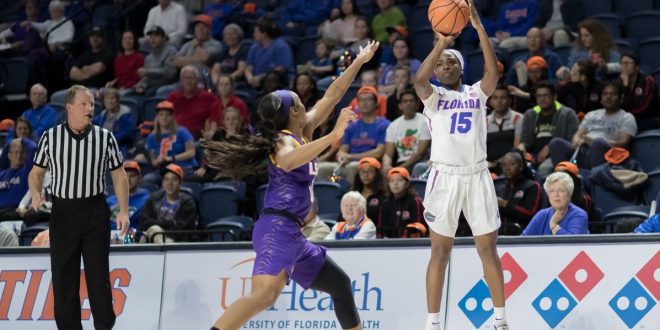 Starting conference play 0-5 can really put a damper on a team’s spirit. For the Florida Gators, the team remains eager to show up at practice, correct the mistakes from the previous game, and continue to improve. Even though the Gators haven’t been focused on the losing streak, the team is due for a win in conference play. They’ll look to end this five game losing skid as they travel to Arkansas to face the Razorbacks Thursday night.

The Gators go into Thursday’s match up with Arkansas with the mindset that they have kept all season, keep shooting. In Sunday’s loss to LSU, the Gators couldn’t get the shots to fall down the stretch. Florida shot 24.3% (9-37) from the field and 12.5% (2-16) from three in the second half. This poor shooting led to the Gators being outscored 21-9 in the third quarter. For the Gators, sophomore guard Sydney Searcy says the only solution to correct this poor shooting is to keep shooting the ball.

The Gators know that the more they dive into SEC play, the more intense defenses they will go up against. Especially when Florida has match ups with South Carolina, Mississippi State, and Tennessee on the horizon. Florida senior guard Dee Anderson says that the team is focusing on getting their shot down in preparation for stingy SEC defenses. Gator coach Cam Newbauer has noticed growth with his Gator offense; he’s preached all year that the starters have taken larger roles in the offense. Newbauer says that the Gators have gained experience in the different roles they have been put into.

The Gators’ kryptonite all season has been when teams resort to a full court press. When teams do this, the Florida offense speeds up. This causes the offense to not develop the look they want or  turn the ball over. LSU had success with this method Sunday. Searcy says that the press affected the Gators’ shot selection in that loss.  It’s no secret that teams will resort to this defense against the Gators. Florida is expecting Arkansas to resort to this defense to slow down the sharp-shooting Gator offense. Newbauer says the team welcomes the challenge.

Similar to the Gators, the Razorbacks are ushering in a new era for their program. This is the first year for head coach Mike Neighbors. Neighbors returned to his alma matter after spending four years as the head coach for the Washington Huskies. The Razorbacks come into Thursday’s game dropping three of its last four SEC contests. Arkansas ended its three game losing streak by beating Auburn 68-58. The win was fueled by a strong second quarter for the Razorbacks, that featured Arkansas outscoring Auburn 25-6.

The Razorback offense is led by junior guard Malica Monk. Monk leads the Razorbacks in scoring, averaging 16.4 points. For the season, the Razorbacks are averaging 70.4 points a game, shooting 37.7% from the field. Arkansas runs a balanced offense that includes averaging 7.8 threes a game. Newbauer says what his team expects from the Razorbacks.

The Razorbacks and Gators will tip things off Thursday night at 7 p.m.