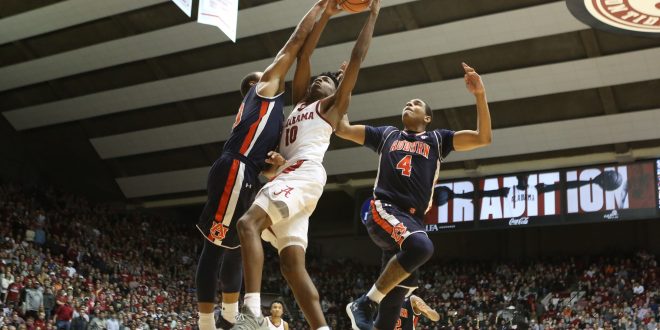 Auburn’s leading scorer was Bryce Brown with 12 points, but three of his teammates also scored in double-figures. Desean Murray recorded a double-double with 11 points and 10 rebounds. Alabama guard John Petty went off for 27 points, ultimately leading the Tide to victory. In another notable statistic, Bama’s Herbert Jones stole the ball four times. However, Alabama still had more turnovers (19-14) and personal fouls (25-21).

Tennessee’s Grant Williams topped the Vols’ scoreboard with 15 points. Despite the loss, the Vols had higher efficiency from three-point range (23.8%-22.2%). Similarly to the Auburn game, the victorious Missouri turned over the ball more often than Tennessee (12-9). But, slightly higher productivity from Missouri brought the Tigers a win. Kevin Puryear led Missouri’s scoring off the bench with 12 points, Jontay Porter was close by with 10, and three other Tigers made 9 points.

Auburn snapped their 14-game winning streak, which was previously the longest in the nation.

The Tigers are bringing the NATION'S LONGEST active winning streak back to The Plains!#WarEagle pic.twitter.com/yd3xDDCnbQ

The SEC Stepped Up

Overall, SEC basketball has made a conference-wide effort to go harder in the paint. With 13 out of 14 teams holding conference records over .500, any given game can go any given way. Earlier in the week, 18th ranked Kentucky lost against South Carolina, giving all three ranked SEC teams L’s this week. Florida currently leads the conference with a 5-1 record and Texas A&M/Vanderbilt bottom out at 1-5.