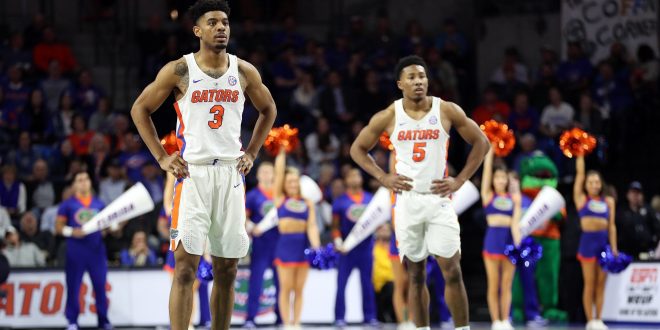 Florida Prepares For No. 18 Kentucky in Lexington on Saturday

The Florida Gators will look for their second straight win as they take on the No. 18 Kentucky Wildcats in Lexington on Saturday night on ESPN. The Gators have played the Wildcats more than any other team in program history besides the Georgia Bulldogs. According to UF, the two teams have met 138 times, with Florida winning only 38 of those matchups. In the past 7 contests, Kentucky has won 6 times by an average margin of 12.8 points. The Gators won their last game, 88-73, at home vs. the Arkansas Razorbacks, while the Wildcats lost their most recent tilt, 76-68, to the South Carolina Gamecocks.

Just looked this up, Florida 3-16 in last 19 trips to Rupp Arena v. Kentucky. All three teams that won during that span (06, 07, 14) at least made Final Four. Tells you caliber of team you need to win at Kentucky.

The Kentucky Wildcats have 8 freshman on their roster and not a single senior. The team usually starts 5 freshman in Hamidou Diallo, Kevin Knox, Shai Gilgeous-Alexander, Nick Richards and PJ Washington. Sophomore F/C Wenyen Gabriel is currently the only non-freshman averaging more than 20 minutes per game

Knox is the best scorer of the bunch and is averaging a team-leading 14.6 PPG on 44.1% shooting from the field. The first year forward out of Tampa is averaging 19 PPG over the Wildcats’ last two games, but is only shooting 10% from beyond the arc (1-10) over that span. Gilgeous-Alexander, a former 3-star Florida commit who John Calipari flipped once his stock rose to a 4-star, top 50 prospect, is shooting nearly 50% from the field and averaging 12 points and 1.9 steals per contest.

The Gators will look to create offense off of defense like they did so effectively against the Arkansas Razorbacks. The South Carolina Gamecocks were able to beat the Wildcats in large part due to the 16 turnovers that they forced. On the season, Kentucky is turning the ball over on almost 20% of their total possessions. Kevin Knox and Shai Gilgeous-Alexander are currently combining for 5.2 turnovers per game. Florida is forcing giveaways on 20.5% of possessions on the season.

The Wildcats are the 4th tallest team in college basketball and are as long a team as Florida will face all season. Kentucky has an average height of 6-feet 7-inches compared to Florida’s average of 6-feet, 4.8 inches. Kentucky’s most common starting lineup with Quade Green out of Diallo, Knox, Gilgeous-Alexander, Richards and Washington averages a height of 6-feet-7.6 inches.

In SEC play, Florida is currently ranked 1st in offensive efficiency, 1st in effective FG% and 1st in 3-Point%. 41.3% of the Gators’ points during conference play have come off of three-pointers, the most of any team in the league. UF is also 11-3 on the season when they sink 8 or more shots from three-point range. While Kentucky is currently the worst team in the SEC at defending the paint, they’re ranked No. 1 in the conference in three-point percentage defense, holding league opponents to 25% shooting from beyond the arc. While the Gators don’t have a go to post-presence, they’ll need to find a way to get KeVaughn Allen, Jalen Hudson, Egor Koulechov, Keith Stone and Chris Chiozza to the rack to soften up Kentucky’s perimeter defense.

John Egbunu (knee) and Isaiah Stokes (knee) are definitively out for Florida’s game on Saturday vs. Kentucky. Chase Johnson (concussion) is currently day-to-day, while Mike White described Gorjok Gak (concussion) as doubtful for Saturday. Guard Quade Green (back) and forward Tai Wynyard (back) are both questionable/game-time decisions for the Wildcats on Saturday.

Quade Green is in practice shorts and sneakers as players wander in and out getting ready for practice, FWIW.