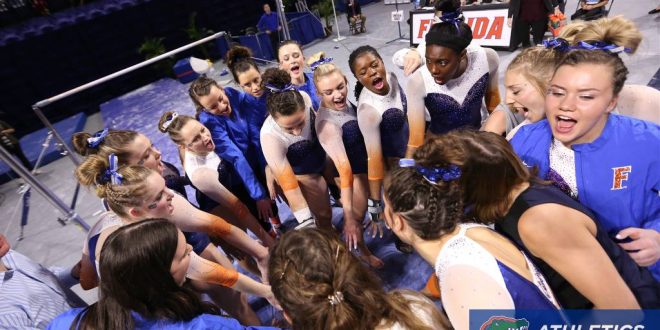 The No. 5 Florida Gators Gymnastics team will be hosting the No. 1 Oklahoma Sooners on Friday, January 26. This meet will bring the nation’s top gymnastics dual of the weekend to The Exactech Arena.

This is the second time this season that the Gators will host a No.1 ranking team at the Exactech Arena. The Gators hosted then No.1 LSU Tigers on January 12 as their home opener and was nipped with a lost of 197.25-197.125.

After winning last week against the now No.6 Kentucky Wildcats, 196.325-195.950, the Gators have moved ip one spot in the NCAA Women’s Gymnastics ranking.

Rachel Gowey won her first collegiate bars title with a score of 9.825 and Rachel Slosum earned a Gators season-high of 9.925 on the vault and her first title of the 2018 season.

The Gators also managed to earn the No. 1 spot on Sportscenter #espnWtop 10.

Friday’s meet will begin at 6:45 p.m. and you can watch live coverage on SEC Network+.