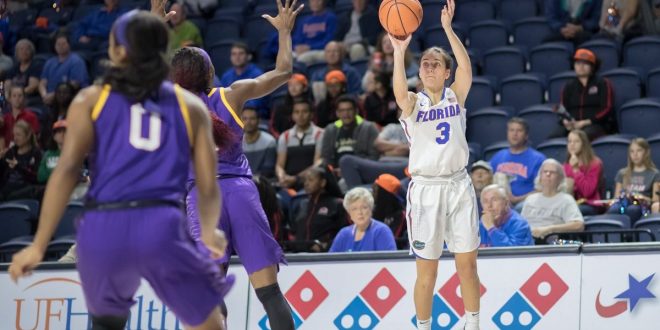 Gator Women’s Basketball Overpowered By No. 2 Mississippi State In 90-53 Loss

The Florida women’s basketball team kept it close for a while taking on number two Mississippi State on the road but in the end the Bulldogs were too much in a 90-53 loss for Florida on Thursday night.

When looking at the final score, it might be hard to believe that the Gators were down by just two points at one juncture in the game.  Florida went on a 10-2 run to start the second quarter, fueled by an unusual scoring drought for the Bulldogs. They cut the lead down the Mississippi State lead to 22-20. Then, following a Florida turnover, the Bulldogs took full control. Mississippi State flexed their muscles and showed why they are the second ranked team in the country.

The turnover bug has been a consistent problem for the Gators. Mississippi State, one of the better teams at creating turnovers, was ready to exploit this problem against Florida. The Gators committed 23 turnovers against the Bulldogs, leading to 27 points. Most of Florida’s turnovers were self-inflicted: bad passes, inbound violations and telegraphed passes that led to easy steals. Florida sophomore guard Delicia Washington had nine turnovers alone while Mississippi State had seven turnovers combined.

Mississippi State did an excellent job in keeping Florida from establishing a rhythm with the three-point shot. The Bulldog defenders closed out quickly on Florida shooters, begging the Gators to try go inside and face the intimidating presence of Bulldogs forward Teaira McCowan.

Coming into the game, Florida knew they had to stop McCowan and Mississippi State on the interior. Even with that in mind, they had trouble keeping the Bulldogs from the paint. Mississippi State had essentially half their points in the paint (48). McCowan finished with a team high 23 points. On her Senior Night, guard Victoria Vivians added 17 points for the Bulldogs.

Florida travelled to Starkville as a massive underdog to last year’s national semifinalist. Early on, Florida was able to make the crowd inside the Humphrey Coliseum nervous. Down by nine midway through the first quarter, Florida would embark on a run to get them within striking distance. Sophomore guard Sydney Searcy gave the Gators their first three of the game with just seconds left in the first. Florida’s second three of the game, courtesy of junior Funda Nakkasoglu, put Florida down by two. The Gators had Mississippi State on a close to four minute scoring drought and were on a 10-2 run. That drought quickly ended when Florida committed a five second violation on an inbound and Mississippi State scored on the ensuing possession.

Even though the box score showed otherwise, Florida head coach Cam Newbauer was proud of the fight that his team showed.

The Gators always use losses as an opportunity to evaluate themselves. Thursday’s loss to one of the best teams in the country really put Florida to the test. The game allowed Florida to see where they stand among the best. Florida did have some bright spots that they could build on before the rematch in a few weeks. One of those bright spots was the play of Funda Nakkasoglu. Nakkasoglu had all of Florida’s points through most of the first quarter. She led the team in scoring with 19 points. The performance was a great sign because she has been quiet on the scoring front the last few games. Newbauer said Nakkasoglu’s vision helped her against the Bulldogs.

Florida continued its success on the boards against one of the best teams in the country. The Gators held the rebounding edge for the fifth game in a row, outrebounding Mississippi State 37-32. Newbauer said rebounding was one of many positives to take out of Thursday’s loss.

The Gators return home looking to get back in the win column as they face another test. Florida hosts rival Georgia, who comes into Gainesville with a Top-25 ranking and second best record in the SEC. This rivalry will write a new chapter Sunday at Exactech Arena with tip-off at 2 p.m.

Previous Preview: No. 5 Florida Gators host No. 1 Oklahoma Sooners
Next Will Trae Young Continue to Shine in Tuscaloosa?