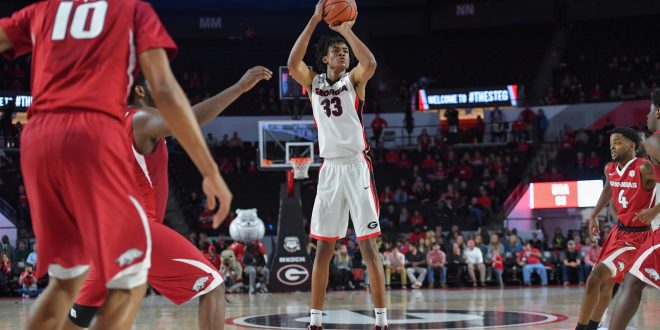 The Georgia Bulldogs (12-7, 3-5 SEC) are preparing for a road trip against the Kansas State Wildcats (15-5, 5-3 Big 12). Georgia is looking to shake off a two-game loss streak in the SEC/Challenge Cup weekend game.

Georgia hits the road again for their game against Kansas State. This game is a part of the SEC/Challenge Cup weekend, and tip off is set for 2pm on ESPNU.#GoDawgs | #CommitToTheG

Georgia will be four days out from an 80-77 loss to Arkansas on the road. In the conference game, Georgia was able to shine in turnovers (17) and rebounds (38). Kansas State, meanwhile, is coming off a 90-83 victory at Baylor. Despite the win, Kansas State was outperformed in two stats: Turnovers and rebounds.

Georgia’s key to victory will be senior forward Yante Maten. Despite Georgia losing, the 240-pounder would have a strong showing for the Bulldogs. Maten would put up 26 points, and go 6-for-16 on field goals, with 13-for-16 free throws made. Georgia would be outshot from behind the three-point arc, with only 40.9 percent going in.

UGA would also outclass the Razorbacks in assists with 17 to Arkansas’ 10. The Bulldogs will have to rely on the stellar play of Maten, as well as their turnover and rebounding ability, to defeat the Wildcats. These two keys will also be important for Georgia, as this will help the SEC continue its reign as the conference to be in for college basketball.

For Kansas State, their key player is junior guard Barry Brown. Not only would he put 34 points on the board against Baylor, but he would make a little history wile doing so. Brown is now the first player with two 30+ point games since Rodney McGruder in 2012.

One other key for Kansas State will be to once again outscore their opponent behind the arc. They would score 47.1 percent of their three-pointer attempts to Baylor’s 33.3 percent. If the Wildcats can outmatch their opponent behind the arc, as well as rely on Brown for another fantastic day on the court, then the Big 12 will be able to reign victorious in this SEC/Big 12 challenge.

The showdown between the Bulldogs and the Wildcats will take place on Saturday at 2 p.m. ESPNU will be broadcasting the game live from Bramlage Coliseum in Manhattan, Kansas. Finally, stick with ESPN 98.1 FM – 850 AM WRUF for more on college basketball.