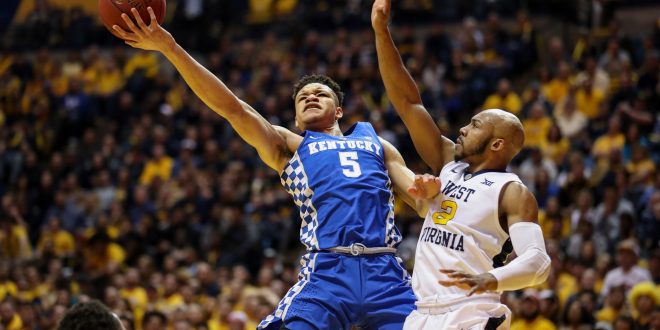 Will the Kentucky Wildcats be able to Continue their Success?

The Kentucky Wildcats are back at the Rupp Arena to take on the Vanderbilt Commodores on Tuesday (1/30)  at 9:00 p.m. EST.

The Wildcats on the Rise

After dropping out of the AP poll for the first time since 2014 last week, Kentucky was able to make an astonishing comeback at the seventh-ranked West Virginia’s court. Now, this week, Kentucky is back into the rankings at No. 21. The Wildcats are 16-5 overall and 5-3 in the SEC. And now they face another SEC adversary.

Kevin Knox. He’s the backbone for the Wildcats right now. The freshman forward averages the team-best 15.5 points per game and 5.7 rebounds. In their most recent matchup against the Mountaineers, Knox was able to secure 34 points in 17 baskets this past Saturday. What separates him from other stellar freshman, is his ability to deliver at the most pressing moments. The Wildcats will be looking to him tonight and as they move into the last month of the regular season.

Is Vanderbilt a Threat?

“I think our guys have got a little confidence.”

Winners of two of three, can @VandyMBB make some more magic at Rupp Arena?https://t.co/n8nS4dSmvE pic.twitter.com/eillwn9VtH

Looking at their record, Vanderbilt might appear like an easy game for the Wildcats, but that is not necessarily the case. In their last three games, the Commodores were able to grab a win over LSU, barely lose to Tennessee (67-62) and a great win against TCU in the Big 12-SEC Challenge.

From an offense standpoint, the Commodores are led by senior forward, Jeff Roberson, and senior guard, Riley LaChance. Roberson averages 15.6 points per game while LaChance averages 12.7 points. Vanderbilt is in a bit of a rough patch, but despite their hardships, they have managed to be successful. While the Commodores struggle with consistency, they still have the ability to obtain wins when needed.