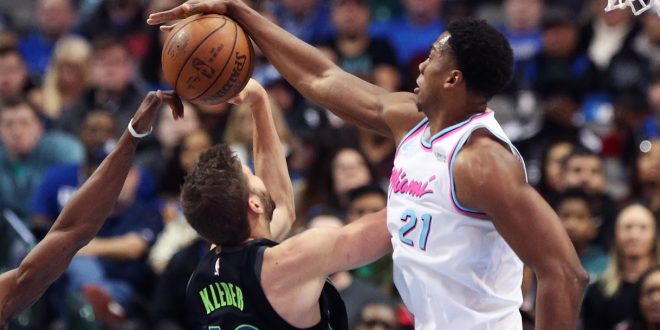 Miami Heat was down 26-22 at the end of the first quarter. It wasn’t until there was 9:14 left in the second quarter when Heat’s Wayne Ellington made a 25-foot three-point shot to tie the game at 30-30. The Heat then took the lead when Maverick’s Dirk Nowitzki fouled Heat’s Kelly Olynyk to make both his free throws.

The game continued to be close throughout the second quarter when Maverick’s Harrison Barnes tied the game 35-35 with 6:12 left in the half. The Heat couldn’t secure the lead again until 4:18 left when Tyler Johnson made a three-pointer making it a three-point game.

The Heat ended the half 51-46 and continued to keep the lead throughout the rest of the game securing a 95-88 victory.

Out of the Heat’s 30 seasons, this is the 14th time Miami has swept the Mavs in their regular season series, according to ESPN. The last time these two teams played each other was on December 22 where the Heat beat the Mavs 113-101.

Miami and Dallas met twice in the NBA Finals when Miami won it’s first championship in 2006 and the Mavs won their only title in 2011.

Miami will head to Cleveland to take on the Cavs Wednesday night at 7:30 p.m. Meanwhile, the Dallas Mavericks hit the road to take on Phoenix also on Wednesday at 10:30 p.m.

Previous FHSAA approves football changes
Next Will the Kentucky Wildcats be able to Continue their Success?