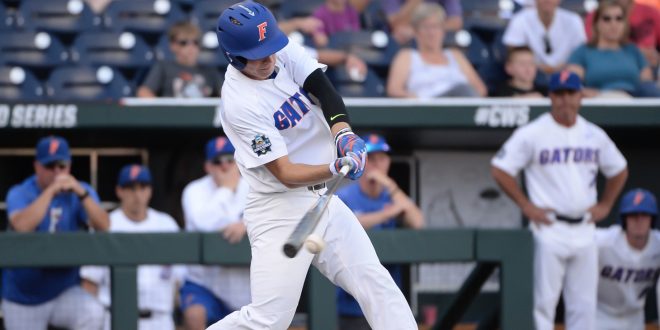 Back in October, Florida manager, Kevin O’Sullivan, named JJ Schwarz the first-ever Gator Baseball Team Captain. O’Sullivan has revered how much of a team player JJ has been over his college career. Especially when he moved from catcher to first base to help the team out. O’Sullivan was thrilled to hear Schwarz decided to come back for his senior year after being drafted in the 38th round by the Tampa Bay Rays.

Schwarz decided to forego the pros to come back for his senior season is what ultimately lead Sully to named him the 2018 Team Captain.

For the first time under Kevin O'Sullivan, the #Gators will have an official captain. #UseTheSchwarz pic.twitter.com/VU2JAHrabm

Catcher is the position of the most authority on the field, and JJ believes that should help with his new role as team captain. Schwarz also says, that one of the things he’ll be helping the team with is body language. After watching some of the scrimmages, Schwarz noticed how much it plays a part of the game for the viewer and wants to help the freshmen with there body language.

Schwarz started his collegiate career out swinging, literally. He ended his freshman season with an amazing 18 home runs, 85 hits, and 73 RBI’s. After just his first season he was already a household name for Gator fans. His outstanding freshman year also earned himself 21 collegiate awards.

In his second year at Florida, Schwarz had another great year with 7 home runs, 73 hits and 60 RBI’s. Towards the end of the 2016 season, first baseman, Peter Alonso, suffered a broken hand and with little depth at 1st Schwarz stepped up to help his team.

In his 3rd year, JJ continued to help out at first after former first baseman, Peter Alonso, was drafted. While Schwarz’s team strove to become the 2017 National Champions, he came away with 12 home runs, 67 hits and 56 RBI’s.

JJ Schwarz will be the leader of the first class to ever defend a baseball National Championship at the University of Florida. With his role as captain, the underclassmen will look to him for his guidance for another successful season.