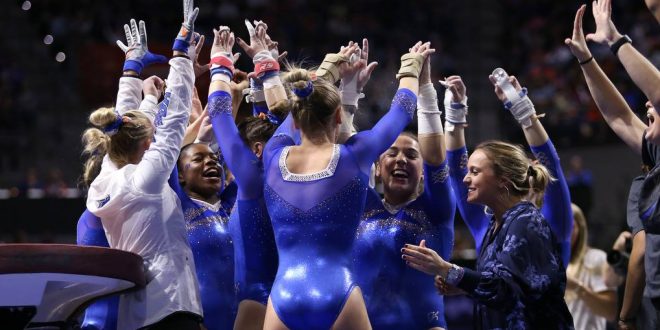 The Gators outscored the Tigers in three of the four rotations.

Florida began the first rotation on bars. Alex McMurtry took the bars title with a 9.975. Amelia Hundley also put on a strong performance, scoring a 9.875. Auburn started the night off on vault. Sophomore Gracie Day earned the top score for the Tigers with a 9.925.

The second rotation had the Gators on vault, an area Florida has improved in throughout the season. McMurtry and Kennedy Baker were standouts, earning 9.950 and 9.900 respectively. The Tigers saw a few mistakes on bars, allowing Florida to take the lead.

The Gators performed on floor for the third rotation. Florida was able to execute dynamic and energetic routines, despite a slightly different lineup. The Gators showed they have a lot of depth. Alicia Boren scored an almost-perfect 9.95, helping Florida keep the lead heading into the final rotation.

The fourth and final rotation had the Gators on beam and the Tigers on floor. Boren again took the high score for Florida, earning a 9.925.

Florida heads home for another SEC meet this week. The Gators will host Alabama Friday at 6:45 p.m.

Born and raised at the ballpark! Typically quiet- until it comes to sports. I'm a South Florida native with a passion for baseball nearly as strong as my faith. Grew up in garnet + gold, turned out sporting orange + blue. Likely to be found with a camera. And yes, I take food pictures.
@victoriarossman
Previous Gators in Super Bowl LII
Next After A Week Off, Gator Women’s Basketball Returns For A Road Challenge Against No. 15 Missouri