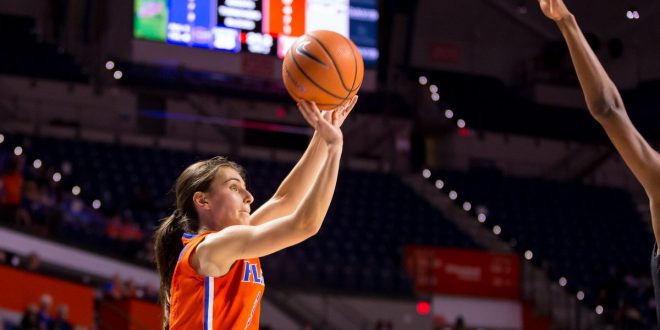 After A Week Off, Gator Women’s Basketball Returns For A Road Challenge Against No. 15 Missouri

The Gator women’s basketball team had a week to improve following a devastating fourth-quarter collapse to rival Georgia. The week allowed the Gators to focus in on what caused the loss and what can be done to correct it. They return to action Monday night with yet another tough test. Florida hits the road to face No. 15 Missouri.

The Gators were on the right track to pull off the upset against the rival Bulldogs. However, a fourth-quarter collapse prevented Florida from getting its first ranked win of the season. The Gators were outscored 31-15 in the game’s final period. The Gators have dropped all three games this season where, at one point, they held a double-digit lead.

Holding a lead late in games has been a constant problem for the Gators this season. Florida senior guard Dee Anderson said that the team’s eagerness in the moment causes them to speed things up.

Gators head coach Cam Newbauer said toughness is the key for his team to handle holding the lead late in games.

The stats show that the Gators are one of the most deadly teams from beyond the arc. The Gators are ranked first in the SEC in three-pointers made (187). Recently, however, the three ball hasn’t been falling for the Gators. In their last three outings, the Gators are shooting a combined 11-53 from three. This includes their worst shooting performance from three for the season against Georgia (2-15 from three). To put the combined numbers in perspective, Florida averaged close to 9 three-pointers a game before the last three games.

Florida junior guard Funda Nakkasoglu is second in the SEC in three-pointers per game. Nakkasoglu said that the team needs to remain confident shooting the three ball.

Florida’s loss to Georgia was heartbreaking for the team immediately following the game. The days following the loss allowed the team to take away a major positive from the game. Florida’s confidence rose once they put the game into perspective that they took a nationally ranked Georiga team all the way to the end while leading most of the way. The Gators didn’t have the sustained success against Mississippi State, where Florida hung around for the first half and struggled in the second half. The ability to go toe to toe with stiff competition was a bright spot in what was a tough loss.

Florida senior forward Haley Lorenzen said the performance against Georgia helps the teams confidence going up against elite competition in the next few games.

The Gators face another ranked opponent Monday in No. 15 Missouri. The Tigers, led by head coach Robin Pingeton, come into Monday’s game on a three-game losing streak.Their most recent loss came to No. 2 Mississippi State in the final seconds. Bulldogs guard Victoria Vivians sank the go-ahead jumper with just four seconds to play to give Mississippi State the 57-53 lead.

Even though Missouri is experiencing a rough patch in the schedule, Newbauer said that the Tigers pose a tough test for his Gators.

An interesting wrinkle to Monday’s matchup is that both teams are at the top of the conference in terms of the three-point shot. Missouri ranks right behind the Gators in three-pointers made for the season with 174.

Nakkasoglu said that the team is excited to go up against a team that has a similar offensive mindset.

The Missouri offense runs through junior guard Sophie Cunningham. Cunningham shoots 45.5% from the three and averages 18.1 points a game.

Florida looks for the upset win when they face No. 15 Missouri Monday. Tip-off from Columbia is set for 7 p.m.