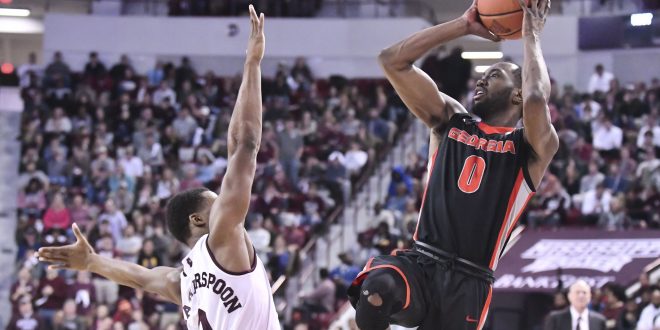 The Georgia Bulldogs (13-9, 4-6 SEC) will take on the Vanderbilt Commodores (8-15, 2-8 SEC) Wednesday night in Memorial Gym at 8:30 p.m. on the SEC Network. The Bulldogs and the Commodores are both coming off conference losses heading into tonight’s matchup. Mississippi State defeated Georgia, while Vanderbilt lost to Kentucky, in overtime, and Auburn, both games on the road.

Tonight’s game marks Georgia’s fifth away game in a seven-game stretch. The Bulldogs have lost four out of the last five games – the sole win coming against conference rival Florida – but  a win tonight would help them progress higher in the SEC rankings. So far, 11 out of the 14 teams in the league are within two games of each other ranging from 4-6 to 6-4.

Yante Maden, a senior forward, will be crucial in Wednesday’s game. Maden is averaging 34 minutes per game this season and has racked up 197 total rebounds so far, most of them coming off of defensive plays as he leads the league averaging nine rebounds per game. Maten also averages 19.3 points per game, holding the lead in the SEC.

Maden won’t be able to help the team to a win on his own, which is why he’ll need fellow teammate and junior guard William  Jackson II. Jackson comes in at second on team averaging 9.5 points per game. He also carries 12 double-digit games in scoring, including 16 points in the Bulldogs’ win against the Gators.

Coach Mark Fox is not taking Vanderbilt’s overall record for granted, saying their record shows the toughness of the league.

As much Georgia needs a win to finish off their stretch on the road, Vanderbilt needs a spark. The kind of spark that could propel a whole new attitude heading into the second half of the regular season. Vanderbilt carries a higher points per game average than Georgia does, but the Commodores’ overall record speaks for itself despite their home-court advantage over the Bulldogs. A win for the Commodores would move Vanderbilt to a 51-17 record against the Bulldogs at home.

In their matchup against Auburn on Saturday, senior forward Jeff Roberson led the team scoring a career-high 30 points in addition to the 10 rebounds acquired over the course of the evening. The silver lining in their loss against Auburn, however, was recording his seventh double-double of the season.

In addition to Roberson, the Commodores will rely on Riley LeChance. The senior guard has been averaging 12.7 points per game this season. LeChance has also made 51 shots from behind the paint, putting him at first overall on the team for three-point shots completed.

Mari Faiello is a second-year journalism student and sports writer for the Alligator. She covers the University of Florida's softball team and has previously covered UF men's tennis, UF women's tennis and UF volleyball. She has worked at the paper since Fall 2017. She has worked at ESPN 98.1 FM - 850 AM WRUF since Spring 2018. Her favorite sports are volleyball, college football and hockey (Tampa Bay Lightning).
@@faiello_mari
Previous Eastside Rams Boys Basketball Defeat Buchholz for 7th Win in a Row
Next National Signing Day Recap