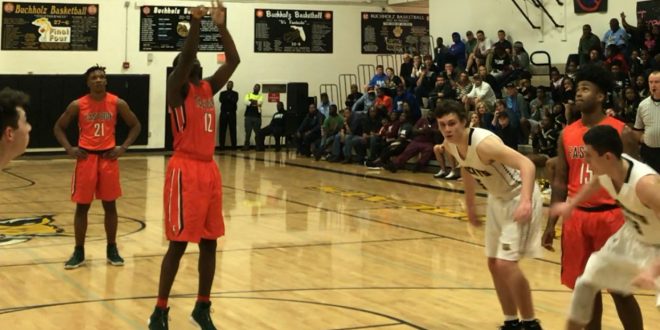 It was an exciting Senior Night at Buchholz High inside of Bud Seymour Gymnasium this past Tuesday night, when the visiting Eastside Rams (20-4) came to take on the Buchholz Bobcats (8-15) in a classic rivalry matchup.

The Rams have been dominant in the past three weeks. They’ve won their last seven games by an average margin of 13 points, including a 42-point blowout against Williston (6-15) on January 30. The Rams are sitting at the top of their 6A District 6 standings with a 7-1 record, tied for first with North Marion. On the other hand, Buchholz has struggled. Losing five of their last seven games and are currently dead last in 8A District 4 with a record of 0-7.

These two teams previously met earlier in the season on the night of November 30. That game ended in a 21-point victory for Eastside, marking their second win of the season and giving the Bobcats their first loss on opening night.

Eastside won the tip and began the game in their usual manner. Aggressive attack inside the paint while looking for fouls or kicking it out for a wide-open three-pointer. They led 6-0 early in the 1st quarter. That run ended quickly for the Rams when Bobcats’ Trent Whittemore and Cam Orth sparked an 8-0 run to give them the 8-6 lead at the end of the first.

Great way to sacrifice your body to take one for the team. Noah Richardson of Eastside with an excellent defensive play to take the charge on Trent Whittemore. #HighschoolBasketball pic.twitter.com/sijMCFS88r

By the end of the first half, neither team could pull away as they headed into the locker rooms all tied up at 16 apiece. James Pope led all Eastside scorers with 6 points and Trent Whittemore led all players with 8 points at the half.

Eastside head coach Herman “Pop” Williams gave some words of wisdom for his team at the half.

“We needed to penetrate the zone and go into the open spots and hit those open shots more,” Williams said. “We also got to start concentrating on defense more because they’re starting to break us down a a lot of times and we needed to make adjustments ASAP.”

The second half demonstrates the effect of each coach’s half-time pep talk in full effect. And boy was it fun. The Bobcats came out from the locker room shooting lights out as they gained a comfortable 24-17 lead with 4:50 left in the third.

Buchholz on a 8-1 run with 4:50 left in the 3rd quarter. Bobcats lead Eastside 24-17 #HighschoolBasketball

Their second 8-0 run of the game concluded when Eastside’s Anthony Richardson caught on fire from beyond the arc, knocking down three straight 3-pointers in a row. James Pope was also feeling it from downtown, knocking a crucial 3-pointer to give them their first lead since the first half at the end of the 3rd.

End of the third. Eastside came back to take the lead on a 14-5 run led by Anthony Richardson with three straight three-pointers.
Rams 31 – 29 Bobcats
Back and forth we go as we enter the 4th! #highschoolbasketball

Buchholz was doing everything right to keep themselves alive against this tough Eastside team. Unfortunately for the Bobcats, their star player Trent Whittemore suffered an apparent ankle injury with a little under a minute into the fourth. He was fouled while going for a layup and landed awkwardly and immediately began to grimace and hold his leg in pain. That injury ultimately ruled him out for the rest of the game. Although, Whittemore did finish his play through the ankle injury, knocking down his and-one free throw before sitting out.

Since the injury, the Bobcats couldn’t knock down a field goal until the final seconds of the game, when Cameron Tener nailed a crucial 3-pointer to cut their deficit to 3 with 9.5 seconds left in regulation.

After, Eastside was immediately fouled once they gained possession. Jimmy Johnson headed to the charity stripe to shoot two. He misses one, Buchholz recovers and sprints back on a fastbreak, they lob up a wild 3-point shot that ends up nowhere near the rim, game over.

Senior night, known to be a bitter-sweet feeling for the four-year graduates abruptly changed to bitter-bitter at the helms of the Eastside Rams, giving them their final loss of the season.

Anthony Richardson is known for his long-range shooting abilities, so it was no surprise for head coach Williams when he witnessed him knock down three 3-pointers in a row that resulted in some huge momentum for the Rams.

But, controversy struck after the game because of free-throw opportunities. Many fans were thrown off by the fact that Eastside was granted to shoot 21 times at the free-throw line and making 12 of them. Buchholz only went to the free-throw line four times in the entire game, and only made three of them, all by Whittemore.

The Bobcats have concluded their regular season.

The Rams have one final regular season game to play this upcoming Friday, February 9. They face the Gainesville Hurricanes in an epic rematch at Santa Fe College. Eastside blew them out of the water on their last outing back on January 19, 73-53.

Recent grad from the University of Florida. Editing all articles on here while helping out the newbies. Love all things basketball.
@@MarcoJMartinez_
Previous Preview: Texas A&M vs. No. 8 Auburn
Next Georgia and Vanderbilt men’s basketball looking to end lose streak in Wednesday’s matchup