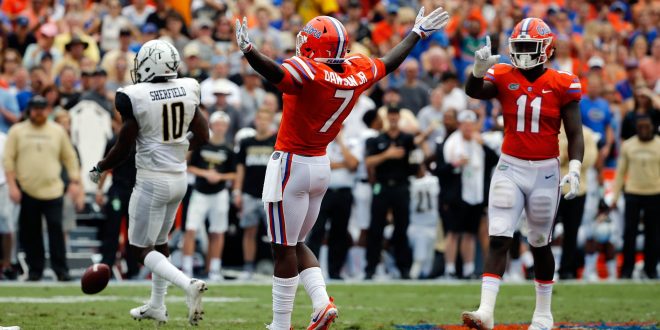 The University of Florida will be well represented at the NFL Combine this year as six former Gators were chosen to participate in the event February 27-March 5 at Lucal Oil Stadium in Indianapolis.   Cornerback Duke Dawson, kicker Eddy Pineiro, defensive tackle Taven Bryan, wide receiver Antonio Callaway, safety Marcell Harris and punter Johnny Townsend are the Gators who will go to the event.

Florida has had 230 players invited to the NFL Combine, which is the most in the SEC. 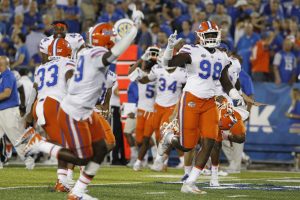 I want to thank @GatorsFB and all the NFL coaches for inviting me and giving me this opportunity to showcase my skills at the NFL combine #NFLCombine2018 pic.twitter.com/eW6lKCgpc8

After starting all 11 games of the season, Bryan declared for the NFL Draft. He ended the 2017 season with 40 tackles, six tackles-for-loss, and three quarterback-hurries. He tied for the second-most sacks on the team with four and he was an Associated Press Second Team All-SEC honoree.

Callaway was one of nine players suspended for the duration of the 2017 season. He played just two seasons at Florida before declaring for the NFL after last season.  In the 2016 season, Callaway started in 11 games and appeared in 12. Callaway became the first player in school history to score a rushing, receiving, passing, punt return, and kickoff return touchdown in a career after his rushing touchdown against Georgia and a kickoff return touchdown against Missouri.

Harris missed the entire 2017 season due to an injury he suffered before fall camp. He declared for the NFL after the season.  In 2016, he had 73 tackles and four tackles-for-loss, one sack, two interceptions, one pass breakup, one quarterback hurry, one forced fumble and one fumble recovery.

Townsend finished the 2017 season with a total of 3,043 yards on 64 punts,  averaging 47.5 yards. He was picked as a Sports Illustrated All-American and named a Second Team All-American by CBS Sports, AP, Sporting News and SB Nation.

After the NFL Combine, players will return to Gainesville for the annual Pro Day when scouts can get an up close and personal look at the Gators who were invited to the NFL Combine and those that were not as well.

Kate Venezio is a fourth-year telecommunication-news student at the University of Florida. Kate does it all: Behind the camera she captures emotional moments as a photographer for the University of Florida Athletic Association. She's comfortable being in front of the camera, too. Kate interviews players, coaches, fans and family members for pre- and post-game coverage as a beat reporter for ESPN Gainesville/WRUF-FM. In addition, Kate produces the sports segment for the weekly WUFT News program. There, she's responsible for writing the script in its entirety to include production commands. The presentation includes video highlights and interviews taped and edited, and Kate then live anchors the final package on a daily deadline. In addition, she writes stories for wruf.com where she informs sports fans of local, state, and national trending topics. Kate also utilizes social media as a tool to help get the stories in front of viewers.
@@kate_venezio
Previous SEC Preview: Rebels host Missouri
Next Thunder Roll Over Warriors at Oracle