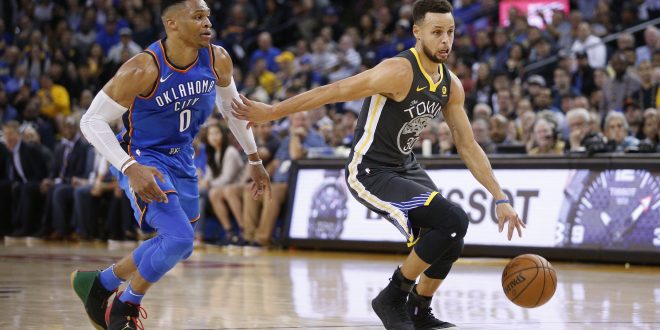 Thunder Roll Over Warriors at Oracle

The Oklahoma City Thunder executed a task that not many teams have been able to accomplish over the past few years;  beat the Golden State Warriors in Oracle Arena. Not only did the Thunder win on the road, but they man-handled the Warriors 125-105.

Kevin Durant paced the Warriors with 33 points and six rebounds. Stephen Curry and Klay Thompson struggled mightily in the contest, combining for 33 points on 11-27 shooting, including 4-15 (26.7%) from beyond the arc.

Curry discussed why the Warriors significantly underperformed on Tuesday night.

Warriors head coach Steve Kerr lamented on the fact that the Warriors are currently in a mid-season funk.

The Warriors have now lost three of their past four games and sit only one game above the Houston Rockets in the Western Conference standings. This is the first time all season that the Warriors have lost back-to-back contests.

All-Star power forward Draymond Green was also ejected with eight minutes remaining in the game after receiving two technical fouls for arguing with the referees.

Warriors will move to 1-4 combined against the Rockets/Thunder this season, probably their two biggest threats in the West.

Oklahoma City controlled nearly every aspect of this contest. They shot 44 of 93 from the field including 12 of31 (38.7%) from beyond the arc. The Thunder forced 25 Golden State turnovers, compared to 12 of their own. They outscored the Warriors in the paint 54-40. On top of this, Carmelo Anthony sprained his right ankle less than six minutes into the contest and did not make an appearance after that. This Thunder victory snapped a four game losing streak.