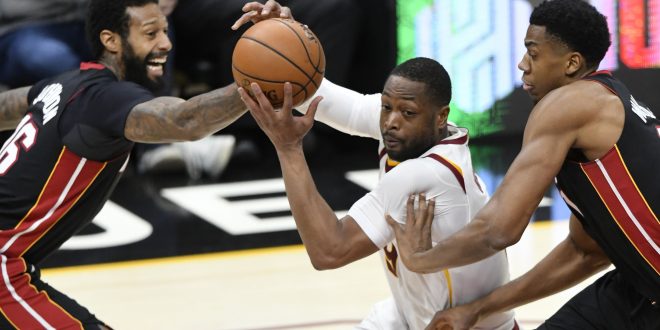 The NBA trade deadline is today. Like every trade deadline, something crazy always happens and today is no exception. Here’s a look at the madness that has unfolded, courtesy of ESPN.

11:15 a.m. – Point guard Jameer Nelson is traded from the Chicago Bulls to the Detroit Pistons for center Willie Reed.

Sources: As part of Jameer Nelson deal, Bulls and Pistons are swapping their second-round picks in 2022.

12:33 p.m. – Forward James Ennis gets traded from the Memphis Grizzlies to the Detroit Pistons for forward Brice Johnson and a second-round pick.

1:10 p.m. – In a three-team deal, the Cavaliers acquire Rodney Hood from the Utah Jazz and George Hill from the Sacramento Kings. The Kings will get Joe Johnson, Iman Shumpert and a 2020 second-round pick (via Miami Heat) while the Jazz will get Jae Crowder and Derrick Rose.

1:15 p.m. – The Cavaliers trade Dwyane Wade to the Miami Heat for a second-round pick. Wade was drafted by the Heat in 2003 as the fifth overall pick and spent his first 13 seasons there.

Looking forward to welcoming two of my brothers back to Miami! @DwyaneWade #LukeBabbitt @MiamiHEAT

2:20 p.m. – The Denver Nuggets, New York Knicks and Dallas Mavericks agree on a three-team deal, sending Devin Harris to Denver, Emmanuel Mudiay to New York and Doug McDermott to Dallas. The Nuggets and Knicks will also be swapping second-round picks.

2:45 p.m. – The Portland Trail Blazers trade Noah Vonleh and cash to the Chicago Bulls for the rights to Milocan Rakovic. The Blazers will get under the luxury tax and receive a $3.5 million traded player exception as part of the deal.

2:59 p.m. – The Orlando Magic trade Elfrid Payton to the Phoenix Suns for a 2018 second-round pick (via Memphis Grizzlies).

Wade a Heat lifer after all

Perhaps the biggest news of the trade deadline was Dwyane Wade being sent back to the team that drafted him. In his 13 seasons with the Heat, Wade averaged 24 points, six assists, and five rebounds. He led the Heat to its first-ever NBA Championship against the Mavericks in the 2006 Finals and won Finals MVP. He then helped the Heat to two more titles in 2012 and 2013 in the LeBron James era.

Isaiah Thomas declared that he was tired of getting traded and wanted to stay with the Cavaliers. But, he got traded anyway. The Lakers will be the fourth team that Thomas gets traded to. He was drafted by the Kings and spent three seasons there before playing for the Suns, Celtics and Cavaliers. His best season came in 2016-17 with the Celtics when he averaged 29 points on 46 percent shooting.