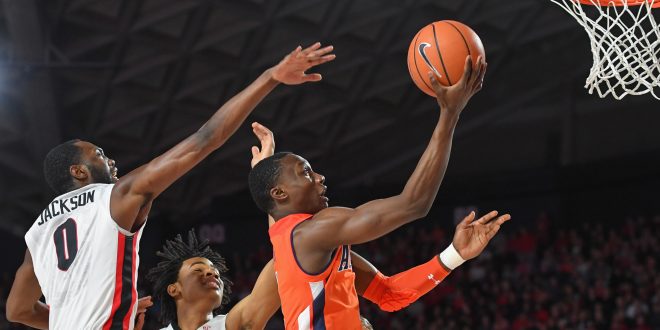 The No.10 Auburn Tigers travel to South Carolina for a Saturday afternoon showdown against the Gamecocks. The Tigers are coming off of an exciting win against Kentucky. Unlike Auburn, the Gamecocks are coming into the weekend with a six game losing streak.

While quickly gaining recognition, Auburn is expected to finish first in the SEC with a possible number one seed. Among hot and cold teams at the top, Auburn remains consistent on offense and defense. As a result, the Tigers have a chance to see an SEC championship. Irregardless, for the first time in 15 years, it is likely Auburn will make it to the NCAA tournament.

After their last game, Auburn’s head coach Bruce Pearl advised the team to take this season one game at a time. With Selection Sunday approaching, he said “We’ve got five games left; we can win them all, we can lose them all.” Then speaking on the upcoming game, he said,  “we’re just going to find a way to get right for South Carolina.

Since the team is consistently strong in scoring from the outside, guards Bryce Brown and Mustapha Heron lead the team in average points per game. Both players are needed offensively in the matchup against South Carolina. For Auburn, consistency is key for a win against the Gamecocks.

Predicted to have a 4-14 record and finish 9th in the SEC.

The Gamecocks are desperately looking to turn their season around. They will host Auburn in the hopes that home court advantage will help flip the script. South Carolina has struggled the last six games against Big 12 team Texas Tech and SEC teams Mississippi State, Texas A&M, Arkansas, Florida, and Tennessee. They currently sit at 7th in the SEC.

Chris Silva (forward), the 6’9 powerhouse up front, is needed against Auburn. Silva has the potential to wreak havoc in the paint against the Tigers. Silva leads the team by quite a large margin in total points and total rebounds. As a team, South Carolina needs to show up big against Auburn.

According to ESPN’s Basketball Power Index, Auburn is predicted to take the game.