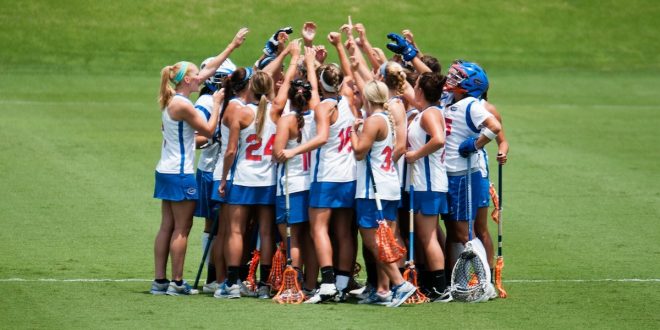 No. 3 Gators Lacrosse Looks to Rebound Against No. 23 Loyola

Coming off a tough home loss, the Florida Gators lacrosse team is looking for redemption against No. 23 Loyola. This will be Florida’s third game in a row at home, and look to go 2-1 on the season.

Florida is coming off a near-epic comeback against No. 1 Maryland. While the team is coming off a loss, the team morale is high. Gators lacrosse head coach Amanda O’Leary believes this game will show that they are going to be stronger from the loss.

The Gators would be down 16-9, but would score five unanswered in a short span of the final minutes of Saturday’s game. One of the reasons for the comeback is junior midfielder Sydney Pirreca. Leading the charge for Florida, Pirreca would total for six goals and eight points against the Terrapins.

The performance last week was also big for another reason. Ultimately, the performance on Saturday would make her the Alpha Lacrosse National Player of the Week.

O’Leary is crediting the coaching staff for their No. 23 rank. She acknowledges the staff, and finds them to be a very well-coached team ahead of the Sunday afternoon matchup.

The Gators are entering this weekend with redemption on the mind, and Loyola is looking for their first victory. With these two ranked teams, fireworks will surely explode on the field this Sunday.

The match between the Gators and the Greyhounds will take place at Donald R. Dizney Stadium in Gainesville. The opening draw will take place at noon, and is a part of Pet Adoption Day. Finally, you can follow ESPN 98.1 FM – 850 AM WRUF on Twitter for live scoring updates from the game.