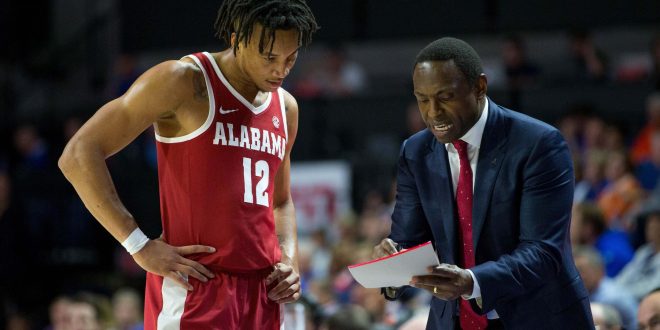 Can The Crimson Tide Still Dance in March?

Alabama Crimson Tide Head Coach, Avery Johnson has some pretty high hopes for the rest of the season. During an interview after the team’s loss to Kentucky, he was disappointed in the Tides effort but still believes they can make a run for the NCAA tournament.

Despite his disappointment, Johnson still has hope that his team can make a run for the Big Dance.  With only 5 SEC Teams being invited to last years tournament, he believes that SEC has improved and will have a bigger presence this year. Teams such as Florida, Alabama, and LSU will also be looking to make a push in these last three games.

The Crimson Tide are currently 17-10 in all conferences and 8-6 in the SEC and still have to face teams like Arkansas, Florida and Texas A&M. But with being a young team many people doubt that Coach Johnson and the Tide will make it to March. ESPN projections have them falling short and having Alabama make a presence in the NIT tournament.

Whether they make the tournament or not Coach Johnson is extremely proud of his team. He believes that they have improved and developed a lot since the beginning of the season. With having six freshmen and four sophomores on their roster the Tide are the youngest team in the SEC.

Alabama will look to make some noise in these next couple 0f weeks with their last three games of the season and if they succeed we will see them in the SEC tournament in St. Louis in two weeks.

Previous Preview: Florida Hosts Arkansas For Link To Pink Meet
Next No. 3 Gators Lacrosse Looks to Rebound Against No. 23 Loyola