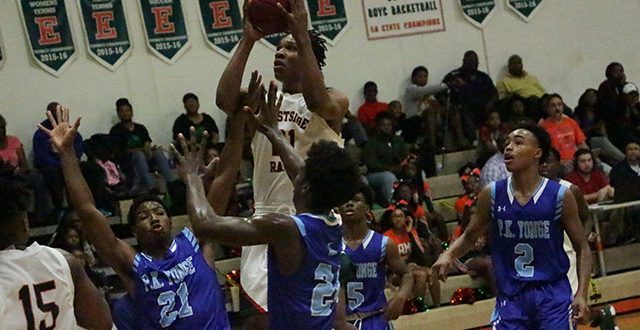 Eastside's Anthony Richardson attempts to score with a flurry of PK Yonge players guarding him. Photo by David Street.

Playoff high school basketball continues to be underway. One of the games will be a regional matchup between the Eastside Rams and the visiting Ponta Vedra Sharks.

How both teams match up with each other

Both teams having winning records. However, Eastside has a more convincing record at 22-5 while Ponta Vedra is barely above .500 at 14-12. The Rams are riding a two-game winning streak and coming off a 47-41 win over the North Marion Colts. The Rams are led by senior guard Jimmy Johnson who leads the team with 10.4 points per game.

The Sharks started their season 1-4 but slowly crawled their way back by going 13-8 the rest of the season. It helps that they have players such as Jack Johnson who leads the team with 11.3 points per game and 8.3 rebounds per game.

WRUF sports director Steve Russell interviewed Pop Williams on his team. Despite Eastside’s success, Williams does not think his team is playing its best basketball.  Williams also commended his players for their ability to step up during injuries and for buying in defensively.

The two teams will play tonight at 7 p.m. You can follow The Prep Zone for coverage.

Previous No. 3 Gators Lacrosse Looks to Rebound Against No. 23 Loyola
Next For Greg Knox, Trust, Effort are Everything