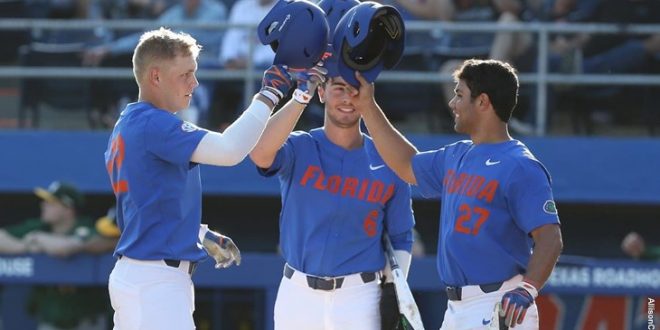 The Florida Gators baseball team will take on the Stony Brook Seawolves in a three-game home series this weekend. Florida has established their reputation as a ‘big name’ program, after multiple College World Series appearances, a national championship, and their current number one ranking. Stony Brook is not a program with as much history but will nonetheless look for the upset this weekend.

Founded in 1966, Stony Brook did not join Division I baseball until the late 1990s. They’ve been a part of the America East Conference since 2002. In this time they’ve achieved two regular season championships, four conference tournaments and four NCAA tournament appearances. Their highest point would come in 2012 when they reached their first and only College World Series.

You can’t talk about Stony Brook without mentioning Head Coach Matt Senk. He’s been with the Seawolves for 27 years, after having joined prior to the 1991 season. Under him, their record is 718-458-4. In 2012, following their remarkable season, Senk won the America East Conference Coach of the Year Award.

Stony Brook has also produced a number of notable alumni:

Senk has had the opportunity to coach players like Joe Nathan, a 6-time MLB All-Star. He says it’s been an unbelievable run with the Seawolves in the years he’s been there.

The Seawolves have started their season completely on the road. They are 6-1 so far, with most of their wins coming in tight matches, decided by three runs or less.

The team has a good mix of upperclassmen and some more younger players joining the mix. Last week, sophomore OF Michael Wilson and freshmen SS Michael Palazzolo were awarded America East Conference Player and Rookie of the Week. Coach Senk has had a lot of praise for his players, and how they’ve started out the season.

Sophomore OF Michael Wilson was named the @AmericaEast Player of the Week for his efforts to lead the Seawolves to three wins in Virginia. He batted .400 with 3 RBI and 3 runs scored during the weekend. #GoSeawolves #AEBASE pic.twitter.com/AhQlVgdjDH

While the team has enjoyed a good start to the season, the Seawolves know that facing Florida will be a whole different ballgame. Coach Senk has prepared his team to face the number one ranked Gators this weekend and they’re hoping to challenge the Gators. He also praised Coach Kevin O’Sullivan and the work he’s done with the Florida baseball team as well as their pitching staff.

The Stony Brook Seawolves will travel to Gainesville and attempt to upset the Florida Gators this weekend. They will face off in a three-game series at the McKethan Stadium.

All three matches will be televised on SEC Network.

@gabymno
Previous Rams Look to Take Next Step in NFC
Next Preview: No. 1 Florida Looks to Stay Hot Against Stony Brook