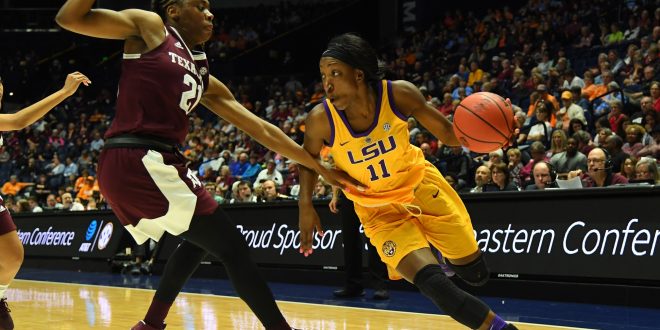 The LSU Lady Tigers basketball team is in the NCAA Tournament.  LSU has made 24 appearances in the Big Dance prior to this season and this year, with a 19-9 record and a dominant 11-1 home record, the Tigers make the NCAA Tournament as a six seed in the Spokane Regional. This is also LSU’s sixth tournament appearance in the last seven seasons.

The Lady Tigers will play their first game against the Central Michigan Chippewas on Saturday.

ICYMI: We are excited to be going to Columbus, Ohio this week to take on Central Michigan in the First Round of the 2018 NCAA Tournament!! #WhatItsAllFour pic.twitter.com/YabcjzrWgY

LSU did not start the 2017-18 season looking like a six seed. The Tigers started the season 4-3 with a notable loss to Northern Colorado. Following its third loss to then second ranked Texas, LSU went on a tear of eight straight wins.

The Lady Tigers picked up their play throughout the SEC stint of their schedule with wins against Tennessee (then number 10) and Georgia (then number 17). LSU helped its tournament stock finishing with an 11-5 conference record in, debatably, the most talented conference in the league.

Despite getting bounced by Texas A&M in the first round of the SEC Tournament, the Tigers are content with their tournament seeding.

Lone senior guard Raigyne Louis was the clear-cut leader of Lady Tigers’ basketball during the regular season. Louis wasn’t the team’s leading scorer but she contributed in a number of ways:

LSU's Raigyne Louis' emotional journey 5 years and 1,500 points in the making: "It brings me to tears finding out that everyone is trying to get this for me, but I want to get this for them." @WBRZ https://t.co/Opg1e6DtiY

Sophomore forward Ayana Mitchell was the Tigers’ third leading scorer averaging 10.9 points per game and led the team in rebounds (5.8 per game) and field-goal percentage (54.9%).

Keys to the Tournament

The Lady Tigers are presented with their best opportunity to make the Final Four since reaching the quarterfinals five consecutive times from 2004-08.

Assuming LSU defeats Central Michigan and meets Ohio State in the second round, the winner of this matchup is likely to face Oregon (#2 seed) in the third round.