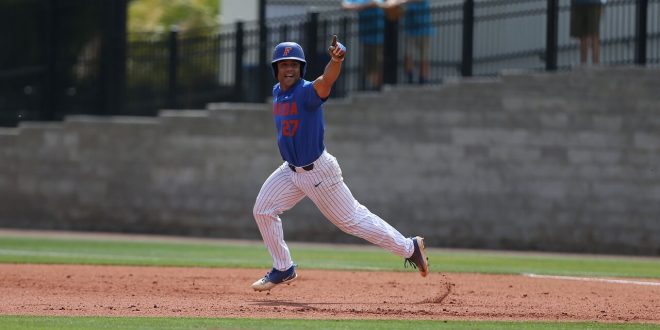 The Florida Gator baseball team took the series from Arkansas by winning 5-4 on Sunday at McKethan Stadium.  It was a back-and-forth contest that ultimately favored Florida at the end of the day.

The Power of the Long Ball

After Jonathan India extended his hitting streak to 11 games with a triple in the second inning, Blake Reese hit a sac fly and drove India in to put the Gators on the board first.  But Arkansas went on to show just how important the long ball can be, blasting back-to-back solo shots in the fourth. This gave the Razorbacks a 2-1 lead, but they didn’t have it for long.

JJ Schwarz answered Arkansas’ home runs with a homer of his own in the bottom of the fourth that also scored Wil Dalton, who reached on a fielding error by the third baseman.  The Razorbacks didn’t give up without a fight, though. They battled back and added on another run in the fifth on a sacrifice fly to again tie the game.

In the seventh, Nelson Maldonado showcased his power when he sent a two-run shot over the left field bleachers to put the Gators back on top 5-3.

Arkansas threatened again with back-to-back doubles to start the ninth. A sacrifice fly brought in another run to make it 5-4 Gators, but that was all the Razorbacks were able to get. Florida escaped the jam with Arkansas having left the tying run on base.

Florida starter Tyler Dyson had a decent outing but left the game in the fifth after giving up back-to-back doubles.

Jordan Butler came in for relief and inherited runners on second and third. Arkansas was able to pick up a sacrifice fly to tie the game but Butler escaped the inning courtesy of two huge strikeouts, stranding the go-ahead run on third.

Gator closer Michael Byrne, who hadn’t pitched all weekend, then took over on the mound in the sixth with bases loaded and only one out. Byrne extended his streak of scoreless innings and retired the Razorbacks on a foul out and ground out.

Foul out + groundout = inning over

Byrne continued to shut down Arkansas the rest of the game until the back-to-back doubles in the ninth and the sacrifice fly led to one last Razorback run. Byrne’s scoreless streak, dating back to last season, ended at 26.2 innings.  But Byrne was able to hold Arkansas to just one run in the ninth, earning his first win of the season and giving the Gators the 5-4 victory.

Gator coach Kevin O’Sullivan says he loves being able to go to Byrne when needed and that he’s such a valuable part of the team.

THAT'S THE BALL GAME!!! #Gators take the series from No. 4 Arkansas

Michael Byrne ends it with a grounder to first.#Gators improve to 4-2 in SEC play and 21-5 overall. pic.twitter.com/5Xa9331h8u

O’Sullivan says he is very proud of the effort his team finished the weekend with after suffering a tough loss Friday night. O’Sullivan added that the crowd’s influence during today’s game meant a lot as well.