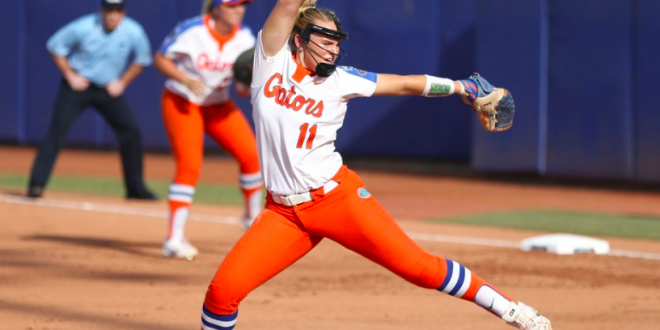 The Florida softball team (25-3, 5-2 SEC) extended their all-time series lead over the Aggies(29-5, 3-1 SEC) to 14-4 at Katie Seashole Pressly Stadium Saturday evening. The Gators opened the three-game series with a 6-1 win.

Kelly Barnhill (13-1) started in the circle for Florida and struck out 12 Aggies, the most times they struck out all year.  It’s the seventh time Barnhill registered 10 or more strikeouts in a game. Gator coach Tim Walton said it’s tough for any team to swing off her.

“Give her a lot of credit, I thought Kelly did a really good job of locating and getting ahead in the count today,” Walton said.

Eventually, Barnhill gave up her first hit, but it wasn’t until the fifth inning. Texas A&M’s Payton McBride singled to left to give the Aggies the first hit of the game.  Barnhill allowed just one more hit; Sarah Hudek’s solo home run put the Aggies on the board in the top of the seventh.

First, a two-RBI single for freshman Jordan Matthews drove in Amanda Lorenz and Nicole DeWitt. Lorenz and DeWitt hit back-to-back singles to reach base. Janell Wheaton extended the lead to 4-0 with a two run homer, her second home run of the season.

Florida tried for more in the third inning but with runners on first and second Aleshia Ocasio ripped the ball to first baseman Tori Vidales who started a triple play against the Gators.

Pinch hitter Jaimie Hoover ripped a double to the gap in right center to score Hannah Adams in the fourth inning.

The very next batter brought in the Gator’s sixth and final run. Lorenz scored Hoover on an RBI single to left field.

Kate Venezio is a fourth-year telecommunication-news student at the University of Florida. Kate does it all: Behind the camera she captures emotional moments as a photographer for the University of Florida Athletic Association. She's comfortable being in front of the camera, too. Kate interviews players, coaches, fans and family members for pre- and post-game coverage as a beat reporter for ESPN Gainesville/WRUF-FM. In addition, Kate produces the sports segment for the weekly WUFT News program. There, she's responsible for writing the script in its entirety to include production commands. The presentation includes video highlights and interviews taped and edited, and Kate then live anchors the final package on a daily deadline. In addition, she writes stories for wruf.com where she informs sports fans of local, state, and national trending topics. Kate also utilizes social media as a tool to help get the stories in front of viewers.
@@kate_venezio
Previous Gator Baseball Takes Series Finale Over Arkansas
Next Gator Bats Electric in 17-2 Rout of Arkansas