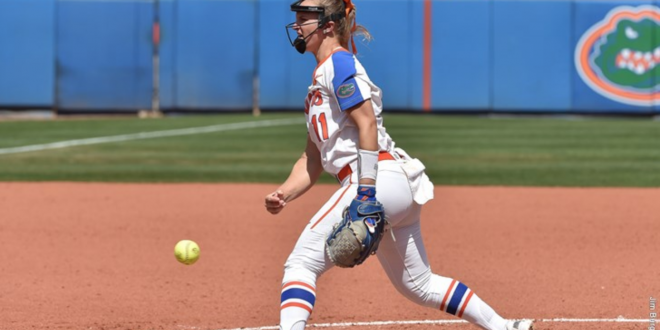 The Florida softball team squares off against Texas A&M for only the 17th time when the two teams meet Saturday through Monday in Gainesville.  The Gators still hold the all-time series lead 13-4.

The Aggies have never won in Gainesville.

Texas A&M (29-4) is undefeated in conference play (5-0). The team is back to SEC play after being only one game away from sweeping the Reveille Classic. The Classic consisted of games between the University of Connecticut, Marist College and Michigan State.

In the six games, the Aggies finished the tournament with a 30-9 run differential over their opponents.

During the last game of the classic, the Aggies defeated Marist, 4-1, giving Kayla Poynter her first career start and win. In 5.1 innings, Poynter struck out four Red Foxes, walked two, and allowed six hits and one run, before Lexi Smith relieved her. Smith allowed only one hit, with one walk and two strikeouts.

Riley Sartain hit her eighth home run of the season, and now has a 10 game hitting streak for the Aggies.

The Gators (24-3, 4-2 SEC) are coming off a midweek 9-0 victory over USF at Katie Seashole Pressly Stadium. Florida improved to 20-1 in non-conference play.

It was Florida’s 18th shutout of the season, and Kelly Barnhill tossed a no-hitter in the win.  Barnhill (12-1) continued to dominate in the circle. With her 16th start of the season, she struck out 12 and allowed just a pair of walks. The junior improved her earned run average to 0.53, while also limiting opposing batters to just a .091 batting average.

Nicole DeWitt’s walk-off home run ended the game in the bottom of the fifth. DeWitt ripped one over centerfield, bringing in three runs.

The SEC series starts Saturday at 5 p.m. and continues through Monday night.

Kate Venezio is a fourth-year telecommunication-news student at the University of Florida. Kate does it all: Behind the camera she captures emotional moments as a photographer for the University of Florida Athletic Association. She's comfortable being in front of the camera, too. Kate interviews players, coaches, fans and family members for pre- and post-game coverage as a beat reporter for ESPN Gainesville/WRUF-FM. In addition, Kate produces the sports segment for the weekly WUFT News program. There, she's responsible for writing the script in its entirety to include production commands. The presentation includes video highlights and interviews taped and edited, and Kate then live anchors the final package on a daily deadline. In addition, she writes stories for wruf.com where she informs sports fans of local, state, and national trending topics. Kate also utilizes social media as a tool to help get the stories in front of viewers.
@@kate_venezio
Previous Florida Athletics Announces Major Renovation Plans For Multiple Sports
Next Gator Baseball Takes Series Finale Over Arkansas