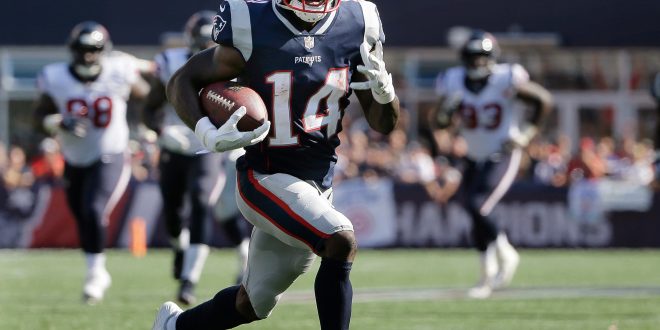 FILE - In this Sept. 24, 2017, file photo, New England Patriots wide receiver Brandin Cooks runs toward the goal line for a touchdown after catching a pass from Tom Brady during the second half of an NFL football game against the Houston Texans in Foxborough, Mass. The Patriots have traded Cooks to the Rams for Los Angeles’ first-round draft pick, 23rd overall. In the deal Tuesday, April 3, 2018, New England also sends a fourth-round choice to the Rams, who give the Patriots a sixth-rounder. (AP Photo/Steven Senne, File)

Brandin Cooks Traded to the Rams

Tom Brady may be losing on of his top receivers, but Jared Goff just gained a fast, new target.

The New England Patriots traded wide receiver Brandin Cooks to the Los Angeles Rams on Tuesday in exchange for the Rams’ first-round pick, the 23rd overall in the 2018 draft. New England also sent a fourth-round choice to the Rams and received a sixth-rounder from Los Angeles. This trade means that the Rams won’t have a first pick in the draft until the third round.

Breaking: The Patriots are trading WR Brandin Cooks and a 4th-round pick to Rams for the 23rd overall pick in the 1st round of the 2018 NFL Draft and a 6th-round pick, league sources told @AdamSchefter. pic.twitter.com/ypNj44Stvk

In 2014, Brandin Cooks was a first-round pick for the New Orleans Saints. Since then, Cook has averaged over 1,000 receiving yards per season with 20 touchdowns over that span. In his one season with the Patriots, Cooks had 65 receptions for 1,082 yards and seven touchdowns. He was the second leading receiver on the Patriots last season, second only to tight end Rob Gronkowski.

Cooks was entering the final year of his contract looking to earn $8.459 million. If the Patriots were to keep Cooks, they would possibly be looking at an expensive contract extension or the franchise tag. The Patriots are no stranger to avoiding big contracts for receivers and proved this to be true by getting a first-round pick in exchange for Cooks.

What This Means for the Rams

For the Rams, this trade means an upgrade for an offense that was already number one in the NFL in points scored. If Cooks plays the same way he did in New Orleans and New England, the Rams could easily find themselves on a Super Bowl run.

This will also be the second year that the Rams will be without a first-round pick in the draft. At number 83 in the third round, the Rams will find themselves on the clock hoping to address their needs for the upcoming season.

The Patriots meanwhile are beginning to stockpile picks and some believe they could pick a quarterback successor to Tom Brady with their first round pick but the team also has needs on the offensive line and at linebacker.