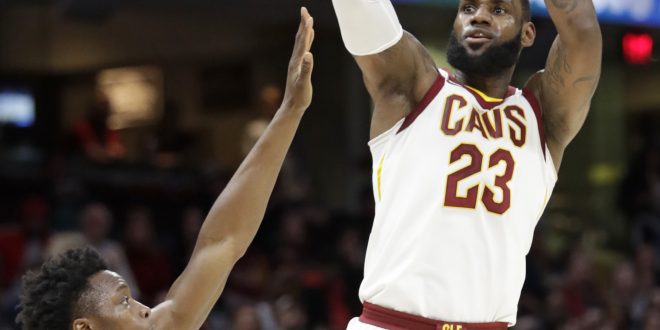 The King is unstoppable. At least, that’s what the Cavs would say.

Tuesday night, the Cleveland Cavaliers captured their fourth win in a row against the Toronto Raptors with a final score of 112-106. Moving it’s way back up to first in the Central Division has had it’s challenges, but LeBron James isn’t focused on that as much as he is on trying to make his team better.

LeBron is stepping up for a postseason mentality

The Cavs (48-30) have just four games before the regular season comes to a close. With its playoff berth intact, the Cavs don’t have too much to worry about, but slacking off will not look good for the team heading into the postseason.

In Tuesday night’s victory over the Raptors, LeBron had an explosive evening in Cleveland, Ohio, notching 27 points in 37 minutes. The 6-foot-8 forward logged three out of six shots behind the paint and recorded 10 defensive rebounds. In the last 10 games, the King has been on the court for an average of 37.9 minutes per game and averaged 30.1 points per game, which isn’t too bad for the 33-year-old Akron, Ohio, native.

LeBron is definitely pulling his own weight on the team, but others are putting in their own work as well. On Tuesday night,  center Kevin Love logged the most rebounds for both sides of the court with 15. Over the last 10 games, the 6-foot-10 Santa Monica, California, native has recorded an average of 9.6 rebounds per game and 15.1 points per game.

Despite the recent win, the team has felt the emptiness on the court without George Hill. The 6-foot-8 point guard was out from Tuesday night’s game with an ankle injury and his status is day-to-day. The Indianapolis, Indiana, native has notched an average of 29.5 minutes and 9.4 points per game over the last 10 contests.

What’s up next for the Cavs

A four-game win streak heading into the last four games of the regular season is great. But LeBron and his team can’t worry about their opponents.

Going into the second half, the Cavs were up 60-52, but in LeBron’s mind they didn’t dominate the home court at all.

Playing well these next four games will be crucial to finding the right “rhythm” heading into a tough postseason.

Up next, the Cavs will take on the Washington Wizards at home at 8 Thursday night. The Wizards (42-36) are also first in their respective division (Southeast), but are coming off a two-game losing streak heading into the matchup.

Mari Faiello is a second-year journalism student and sports writer for the Alligator. She covers the University of Florida's softball team and has previously covered UF men's tennis, UF women's tennis and UF volleyball. She has worked at the paper since Fall 2017. She has worked at ESPN 98.1 FM - 850 AM WRUF since Spring 2018. Her favorite sports are volleyball, college football and hockey (Tampa Bay Lightning).
@@faiello_mari
Previous Brandin Cooks Traded to the Rams
Next Dustin Johnson Hopes to Not Repeat Last Year