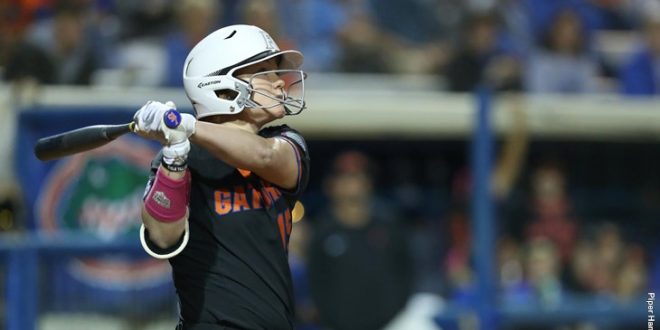 Florida Freshman Danielle Romanello tied the game 2-2 in the top of the fourth with a double down the right field line. Picture by Piper Hansen

No. 6 Florida Softball Travels to Take on No. 13 Florida State

The Florida Gators Softball team stays on the road in their midweek match-up against in-state rival Florida State.

The is the first meeting between these two teams this season, and it’s the first game of the 2018 Fresh from Florida Sunshine Showdown series.

Last weekend, the Gators took on no. 15 Alabama in Tuscaloosa.

The Gators came up short on Sunday, losing to the Crimson Tide 2-3.

In the final game to determine the series winner, the Gators were down early against Alabama. Barnhill gave up a two-run home run in the bottom of the third, 2-0 Crimson Tide.

But, Florida came right back in the top of the fourth. Senior Nicole DeWitt lead off the inning with a walk against ‘Bama Ace Alexis Osorio. Next up, freshman Hannah Adams stayed patient at the plate to walk. Then both senior Aleshia Ocasio and sophomore Jaimie Hoover struck out swinging. Senior Janell Wheaton pulled off a walk to load the bases with two outs. Then freshman Danielle Romanello stepped in to pinch hit. Romanello hit a double down the right-field line that scored DeWitt and Adams. At the end of the fourth, the score was 2-2.

Romanello continued to have a good game. In the top of the sixth inning, she stepped up to the plate and hit her first collegiate home-run to give the Gators a 3-2 lead.

Romanello was named SEC Freshman of the Week because of her performance against Alabama.

With the win on Monday, that earned Head Coach Tim Walton his 700th win as the Gators head coach.

Florida State is also coming off a weekend series win against ACC-foe Pittsburgh.

Like the Gators, the Seminoles won their first game, lost the second, but came back in the final game to win the series.

The Seminoles played Pitt in a Friday-night doubleheader. The score of the first game was 2-1 and the second game was 1-0.

But, on Saturday FSU came out ready to play and run-ruled the Panthers 8-0 in five innings.

First pitch for this rivalry match-up is set for 7 p.m. on Wednesday, April 11.

North Carolina Native with a passion for sports. Follow me on twitter @lcavasinni11
Previous Gators Trying to Complete Season Sweep Of Noles
Next Andrew Luck Confident about His Return