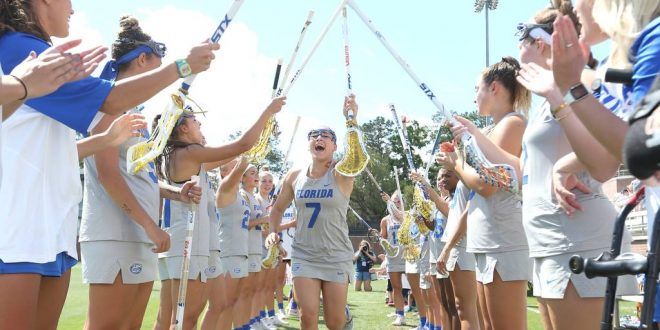 The sixth-ranked Florida lacrosse team looked strong Saturday afternoon as they took down Big East opponent Marquette by a score of 18-6.

The Gators and the Golden Eagles entered Saturday’s game as the only two teams in the Big East undefeated in conference play. Both teams were 5-0. However, Marquette has now lost to all its ranked opponents. The Gators move to 11-3 overall.

The Gators were on the board early, with a goal from Shannon Kavanagh putting Florida up 1-0 within the first two minutes. The Gators then took a 5-1 lead, extending it to 6-1 with a free position goal from Sydney Pirreca. A 10-point lead would allow a running clock with 15:08 remaining. A goal from Marquette made it an 11-2 game. However, the running clock would return with 9:17 remaining in the first half. Florida finished the half with a 14-2 lead.

Florida was in control throughout both halves of the game. Florida’s offense was explosive, with goals coming from up and down the roster. Shayna Pirreca, Sydney Pirreca, and Shannon Kavanagh kept the Gators on the board consistently.

25:50@ShaynaPirreca with her 3rd goal today!

The Gators hit the road Wednesday as they take on Cincinnati. Cincinnati has yet to win a game in conference play.

Born and raised at the ballpark! Typically quiet- until it comes to sports. I'm a South Florida native with a passion for baseball nearly as strong as my faith. Grew up in garnet + gold, turned out sporting orange + blue. Likely to be found with a camera. And yes, I take food pictures.
@victoriarossman
Previous Orange and Blue Game: Tight End Performances and Future
Next No. 1 Florida Baseball Sweeps Doubleheader, Series Against Missouri