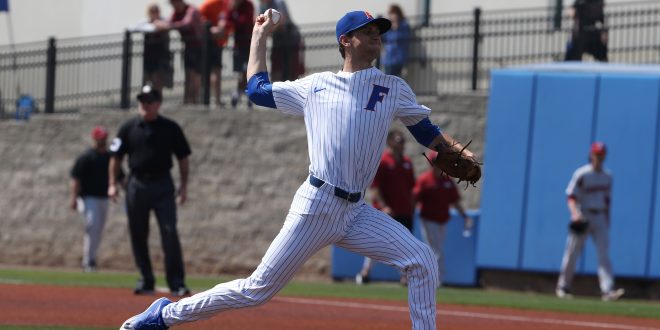 The top-ranked Florida baseball team (32-6, 12-3) completes a sweep of the Missouri Tigers (24-12, 6-9) on Saturday after taking home a pair of victories. Florida won the evening’s first game by a score of 10-2 and won the second game by a score of 7-2. The Gators have now won each of their first five SEC series.

The Gators began their evening by striking quickly against Missouri starter Tyler LaPlante. Jonathan India sparked a rally in the first with a two-out triple to right center. The hit extended his hitting streak to 22 games. After Wil Dalton was hit by a pitch, JJ Schwarz doubled to right center, scoring both India and Dalton, to give Florida an early 2-0 lead.

For quite some time it looked like the two early runs would be all Jackson Kowar would need. It took him just 64 pitches to cruise through his first five innings. Missouri got on the board and tied the game at 2-2 in the sixth when Zach Hanna doubled to score Alex Samples and Brian Sharp.

After the game, Gator coach Kevin O’Sullivan called Kowar’s start his best of the season and described his outing as “crisp.” “We could’ve ran him back out there in the eighth,” O’Sullivan said. “I thought his breaking ball was better, his changeup was outstanding today and he threw some really good fastballs, too.”

Kowar talked about how it was nice to get what was sure to be a long day for the team off to a good start.

JJ Schwarz responded and picked up his third RBI of the game in the bottom of the sixth with a solo home run to left field. Kowar got back on track with a 1-2-3 seventh inning and finished with nine strikeouts.

The Gator offense caught fire and broke the game open in the bottom of the seventh. Keenan Bell doubled into the right-field corner to drive home Nick Horvath and came around to score on the same play.

Keenan Bell pinch hits and rips a RBI double into the corner then comes around to score!!

After a Deacon Liput single to center field, Nelson Maldonado connected and sent a two-run home run over the left field stands to make it 7-2. In the following at-bat, India walked and then scored on an RBI double off the bat of Dalton. A sacrifice fly from Blake Reese to score Dalton would then give the Gators their final run of the inning and extended the lead to 9-2.

Andrew Baker and Tommy Mace combined to work a scoreless eighth. In the Florida half of the frame, Dalton doubled to plate Maldonado. That extended the Florida lead to 10-2, the eventual final score. Mace then worked a 1-2-3 ninth inning to finish the Tigers off.

Tyler Dyson picked up the win but was far from sharp early and was forced to work out of a couple of jams. He went unscathed in the first after loading the bases, but gave up a sacrifice fly in the third inning that gave Missouri a 1-0 lead. He pitched five innings and has now failed to reach the sixth inning in five consecutive starts. In his last two starts, he has walked eight and hit three batters.

Florida immediately answered in the bottom of the third with a tally of their own. Schwarz hit a two-out double down the left field line to score Deacon Liput. The Gators then took a 2-1 lead in the fourth inning on a Brady Smith sacrifice fly that plated Horvath.

Jordan Butler took over for Dyson in the sixth inning and was once again stellar. He pitched two scoreless innings and struck out three Tigers. Butler has now pitched 13.1 scoreless innings over his last eight appearances. After the game, Schwarz touched on how Butler’s ability to bridge the gap from starters to Michael Byrne has had a big impact on the team.

“You know that was one of our questions marks going into the season,” he said. “He picked up that role really nicely and he’s been doing a great job.”

The Gator offense again got hot late, this time in the eighth. Reese singled through the left side to score Schwarz to give Florida their first insurance run. Shortly after, a two-run double from Horvath plated Langworthy and Reese to extend the lead to 5-1. Keenan Bell then capped the inning and put the game away for good with a two-run home run over the bullpen and into a palm tree.

OVER THE BULLPEN AND INTO THE PALM TREE!!

In the ninth inning, Michael Byrne surrendered his third run of the season on the first home run he’s allowed in 2018. Byrne’s ERA is now 0.84.

Jonathan India went 2-for-4 in the second game of Saturday’s doubleheader to extend his hitting streak to 23 games.

In total, 15,989 people attended this weekend’s games. O’Sullivan said the record crowds definitely helped. “Our guys feed off of it,” he said. “It certainly plays a factor.”

Up next, Florida will host Jacksonville University on Tuesday. They defeated the Dolphins 10-3 earlier this season at McKethan Stadium.

I'm an above-average golfer with surprisingly great touch around the greens. Click on my twitter link for some sports talk.
@Ry_McGinn
Previous Gator Lacrosse Takes Down Marquette By Large Margin
Next Breaking Barriers: A Pioneer for Women in Sports