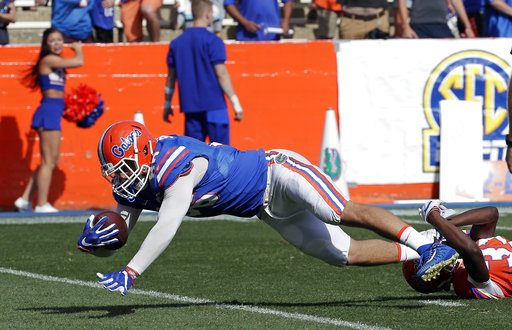 Florida's Andres Saldivar, left, scores a touchdown on a pass play as he gets past Patrick Moorer during an NCAA spring college football intrasquad game, Saturday, April 14, 2018, in Gainesville, Fla. (AP Photo/John Raoux)

The annual Florida spring football game gave a glimpse of the tight end position for the Gators. Dan Mullen’s offense showed that tight ends could be more involved, despite the lack of usage by Florida in recent years. Despite redshirt-seniors C’yontai Lewis and Moral Stephens not making catches, Kemore Gamble, R.J. Raymond, and Andres Saldivar scored touchdowns in the 35-30 win in favor of Team Orange. Raymond and Saldivar have no set position on the roster but are seen as depth for next season.

Kemore Gamble was a prime target for freshman dual-threat quarterback Emory Jones in the third quarter. Jones completed both a 16-yard pass for a first down and a 19-yard touchdown to the redshirt-freshman from Miami. R.J. Raymond also succeeded with Jones under center after he caught a 58-yard touchdown that resulted from him keeping his feet up after a failed tackle. With arguably the play of the game, Raymond launched the ball into the second level after scoring. Redshirt-junior Saldivar scored a touchdown from a 35-yard pass from Nick Sproles on the final play of the game.

Dan Mullen says that he wants his tight ends to progress physically now that they are familiar with the offense. Playing in multiple sets with tight ends who are able to help block or make a catch will help create mismatches.

Mullen added that mismatches and moving people around are keys to having success at the tight end position and at wide receiver as well.

With the season starting in the fall, new tight ends coach Larry Scott said in an interview that the responsibility of the position is second to the quarterback. If the tight ends are more involved, they could draw attention away from the list of receivers available including Tyrie Cleveland and Josh Hammond.