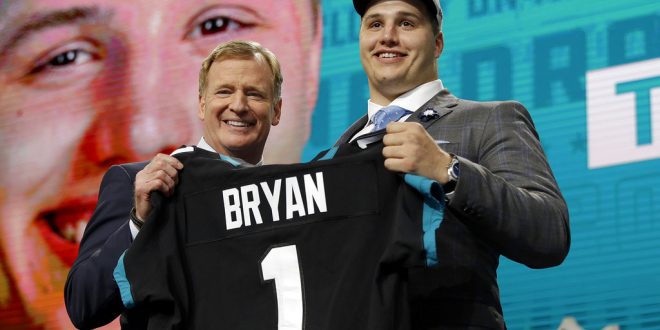 NFL Draft: Taking A Look At Where Gators Landed

A total of five Gators ended up going in the 2018 NFL Draft, while many others ended up signing on as undrafted free agents.

Taven Bryan represented the Gators in the first round, as he went to the Jaguars with the 29th overall pick. Bryan’s selection marks the sixth consecutive draft that a former Gator has been selected in the first round.

Bryan will slot into an already stacked Jacksonville defensive front, which features Calais Campbell, Marcell Dareus, and Malik Jackson. During his time final season at Florida, Bryan racked up 40 total tackles, six tackles for loss, and four sacks. He joins Dante Fowler as former Florida players on the defensive line in Jacksonville.

In the second round, another former Gator came off the board in Duke Dawson, going to the New England Patriots. New England traded up to the 56th overall pick to take the 5’10” corner. After the departure of Malcolm Butler to Tennessee, Dawson has a chance to earn significant playing time in his rookie season, either at outside corner opposite Stephon Gilmore, or in the slot where Butler also line up alot.

Early in the fourth round, the Browns took Antonio Callaway at pick No. 105. Callaway’s off-field issues have been well-documented, including reportedly testing positive for marijuana at the NFL Combine last month. That likely led to him slipping down teams draft boards.

Still, Callaway came into the draft as one of the most talented receivers in the draft with his polished route running and return abilities. If he can stay on the field, Cleveland could have the makings of a good offense with Tyrod Taylor and the recently drafted Baker Mayfield as quarterback options; Nick Chubb in the backfield; and Corey Coleman, Josh Gordon and Jarvis Landry in the receiving core.

Johnny Townsend was the next Gator off the board, going in the fifth round to the Oakland Raiders. Townsend figures to have a good chance at the starting job considering the Raiders released Marquette King in the offseason. Townsend leaves Florida as the school’s all-time leading punter.

A new piece for our special teams unit. With pick 173 we have selected P @johnnytownsend1 from @GatorsFB.#RaiderNation x #NFLDraft pic.twitter.com/zfYgz0qVDe

The final Gator to come off the board was safety Marcell Harris, who went to the 49ers in the sixth round. He’s coming off an achilles injury that caused him to miss the entire 2017 season. Harris will battle for playing time at strong safety with Jaquiski Tartt, Dexter McCoil and Don Jones all also at the position.

Kicker Eddy Piniero and safety Nick Washington will be joining Townsend out in Oakland, as they signed with the Raiders shortly after the draft.

On the offensive side of the ball, receiver Brandon Powell and tight end DeAndre Goolsby both signed with Detroit, where they’ll join former Florida players Jarrad Davis and Teez Tabor.

And in the secondary, defensive back Joseph Putu signed with the Falcons. If he can stick with the team, it’ll give Atlanta’s secondary a heavy Gator flavor with Keanu Neal and Brian Poole already in the lineup.