Erin Andrews, University of Florida alumnus, returned back to her alma mater to accept an Alumni of Distinction Award from UF’s College of Journalism and Communications on Friday, April 20.

During his visit to Gainesville, Andrews spoke to hundreds of UF students about her career (FOX Sports reporter and co-host of Dancing with the Stars) and her start at the University of Florida.

She addressed students through a sit-down seminar with Ted Spiker, the chair of the department of journalism for the College of Journalism and Communications, at the Reitz Union Friday afternoon.

After the talk, students, who admire Andrews and hope to follow in her footsteps, were able to ask her their own questions. Students asked Andrews for advice about finding jobs after graduation and how to use their time at UF wisely.

After her sit down with Ted Spiker, a current student, aspiring to become a sports reporter, was able to interview her as well. And that student was me.

My name is Sydney Jones and I am a junior studying telecommunications. I work as a sports reporter for ESPN WRUF 98.1 FM 850 AM and for WUFT in the University of Florida’s newsroom. I had the opportunity of sitting down with Andrews to talk about her time at UF, any advice she had and what was planned next in her career.

When discussing Andrews time at UF, she only had good things to say about her experience. According to Andrews, the reason she wanted to come to UF was that it had a good football team.

“I wanted to come here because we had a football that was successful and ESPN, CBS, different writers and people I was used to seeing on TV and looked up to were here covering the football team and that was really cool for me,” Andrews said.

Andrews’ favorite moments at UF “have everything to do with being able to hold a microphone.” Many of her great times at UF were centered around sports. She loved going to Florida Gators football and basketball games and being able to interview coaches and players there.

Her time and experience at UF and in the College of Journalism and Communications gave her the skills she needed to succeed in the industry.

“It [the College of Journalism and Communications] really kind of immersed me in such a real-life setting with what I’m dealing with now,” Andrews said. “The environment and what you guys have here to learn from is so close to what we deal with day in and day out.”

However, upon graduation, Andrews didn’t immediately start working. She said she was unemployed for a couple months. Her mom even told her to look for a hostess job at Outback to earn some money.

Her Start as a Woman in a Male-Dominated Industry

Andrews soon found a job as the ringside reporter with the Tampa Bay Lightning. When she first went in to talk to them, she admitted that she knew absolutely nothing about the NHL. However, she still got the job and said knowing nothing about the sport helped her. It taught her how to really study as a sideline reporter. Not knowing the sport motivated her more.

However, this wasn’t the only thing that motivated her.

“I think being one of the few females fuels me,” Andrews said. “It’s why I have a chip on my shoulder, it’s why I study so much, it’s why I’m so competitive because I want to show that I belong because I never played sports.”

She said she travels with 30-40 men every weekend to an NFL city and is the only female that travels. But this is normal for her.

However, she mentioned that there’s always going to be a time when an athlete embarrassed you or said something mean to you. She remembers crying in a locker room after a player was very rude to her. This doesn’t stop her though.

“Everyone has their bad days in their job, but I love sports so much that I know I have to be involved either way,” Andrews said. 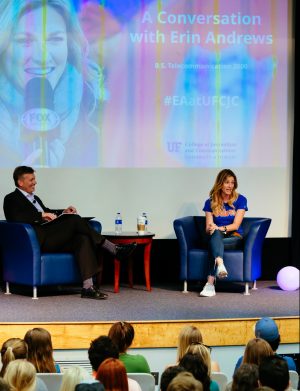 What’s Next in Her Career?

Andrews told me she’s really excited about her future. She is currently pitching three shows to be an executive producer of.

“I have ideas and I know what shows I’d like to see out there so we have three shows we are trying to sell right now,” Andrews said. “And I’m going to be behind the scenes, which is super cool to do.”

She also invested in a company called Religion of Sports, which Tom Brady, Michael Strahan, and Gotham Chopra are involved in. She’s also helping with Tom Brady’s Tom vs. Time episodes on Facebook. Her ultimate goal is to come up with new things to show why sport is a way of life, a religion.

“I’m kinda always looking for new opportunities and new avenues to explore cause I always knew I wanted to be involved in football and I always want to be involved in entertainment,” Andrews said. “But what’s cool about where I am in my life right now is, what other things can I be involved in?”

During my sit-down with Andrews, I asked her what advice she would give to current students aspiring to work as a sports reporter.

Her first response was to have thick skin.

“If you want to do this and be in the public eye, have a Twitter or Instagram account that’s public, people are going to make comments,” Andrews said. “People are always going to think they are better than you and could have asked better questions.”

Her second piece of advice is to study, especially for females.

“We didn’t play in the NFL or NHL,” Andrews said. “You have to be well researched, you have to know to know your stuff and you have to read as much as you can.”

But above all, Andrews said to have fun.

“It’s competitive and it’s a grind, but if you give a little bit of personality and put your own touch on it, I think that’s what makes people have a lot of success,” Andrews said.

Sydney is a senior studying telecommunications with a specialization in sports media at the University of Florida. She is a multimedia sports reporter for ESPN 98.1 FM/850 AM WRUF and WUFT-TV.
Previous Lightning Look to Get Back In Series Against Bruins in Game 2
Next NFL Draft: Taking A Look At Where Gators Landed