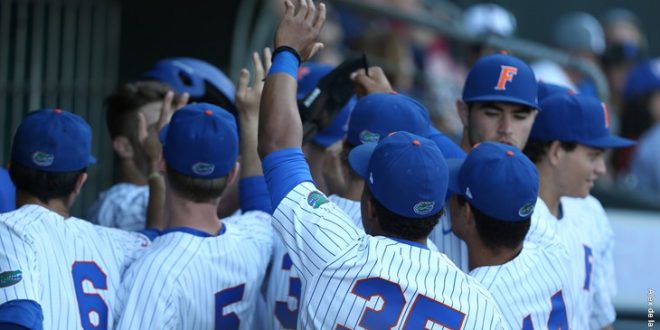 Coming off its 18th consecutive regular season series win, the Gator baseball team (38-11, 18-6 SEC) is set to take on the USF Bulls (29-15, 11-7 AAC) in its final midweek game of the season Tuesday night. The game will be at 6 p.m. in Gainesville and will be broadcast on SEC Network +.

For the sixth consecutive week, Florida has been ranked in the top spot of D1 Baseball’s Top-25. Last week, the Gators took two out of three games against Texas A&M in College Station. The pitching staff was lights out yet again, posting a 2.08 ERA, 22 strikeouts, and just seven walks on the weekend.

Sophomore Tyler Dyson will be making his 11th start of the season against the Bulls. In four starts against non-SEC opponents, Dyson has allowed just three earned runs in 25.1 innings, giving him a 1.07 ERA.

On the offensive side, Blake Reese, JJ Schwarz, and Deacon Liput are coming off of good weekends. Reese led the team with a .500 batting average with four RBI and two walks. Meanwhile, Schwarz also had four RBI and went 5 for 12 with a double and a triple. Liput was also 5 for 12 with two doubles and two walks in the series. Schwarz and Liput both currently have a five-game hitting streak.

Junior Jonathan India seems to be coming out of his slump as well. He went 3 for 4 in Sunday’s game and picked up his 15th home run of the season.

USF enters the match up having taken three out of four games against Memphis and Bethune-Cookman in the final week of April. And for the third week in a row, the Bulls have been ranked in the top-25. This week, USF came in at No. 24 in D1 Baseball’s Top-25.

Sophomore left-hander Noah Yager is set to take the mound for the Bulls when they travel to Gainesville in what will be his first start of the season. Yager allowed only seven hits, two earned runs, and three walks while striking out 19 over a stretch of 12.2 innings pitched.

USF’s pitching leads the American Conference and is fourth in the country with 10.3 strikeouts per nine innings.

Players in the lineup to watch out for are junior outfielder Kyle Phillips who hit .500 against Memphis a couple weeks ago, as well as junior infielder Coco Montes who hit .308 with a team-best four RBI in the series.

Junior David Villar is also swinging a hot bat, as he hit two home runs in the first game of the Memphis series. Villar leads the Bulls with a .373 batting average, the second best in the American Conference. He is also second in the league with 17 doubles and third with 11 home runs.

Going into Tuesday’s match up, the Gators lead the all-time series against the Bulls 60-25. More recently, Florida is 17-2 against USF under head coach Kevin O’Sullivan.

The Gators fell to South Florida at home during the regular season last year 15-10. But Florida picked up the victory over the Bulls 5-1 in 12 innings during the NCAA Regional Tournament.