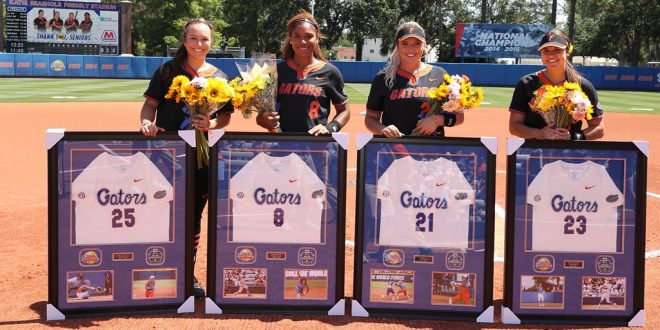 It was more than a 2-0 loss to Oklahoma in the Women’s College World Series for Gator softball junior Amanda Lorenz. It was the last time she would play with four women who have become her best friends.

“It’s special. They’re competitors, and I just have a thing about teammates that just compete each and every day,” Lorenz said while choking up. “It’s been really special. To look at them in the eye, they may not have their best stuff each and every day, but they’ll compete their butt off for you and do anything for this team and for the person next to them, and that’s just really special.”

Lorenz went on to talk about each of the seniors and why she loved playing with each of them. She left Janell Wheaton for last as she had the most to say about the teammate who’s been there through it all.

“This is our dream together, so it’s pretty cool that we committed to Florida together. We wanted to win a national championship together. We won one at travel ball,” Lorenz said. “But to play in the College World Series with someone who made me better growing up and is one of the reasons why I’m here is just really special.”

However, it’s not over for these four seniors just yet. A few of them have opportunities to continue their softball careers outside of college.

However, her incredible softball career is far from over. Back in April, DeWitt was selected as a third-round pick to the USSSA Pride, a National Pro Fastpitch team in Viera, Florida.

Throughout her entire season at Florida, she’s had the biggest support in the stands from her parents, who even came to see DeWitt in the 2018 Women’s College World Series. They both said they couldn’t be prouder of their girl.

If you happened to walk around the stadium during the 2018 Women’s College World Series, you might have heard senior Aleshia Ocasio‘s name more than a few times. Ocasio became the first UF pitcher to throw a seven-inning no-hitter in postseason history during the Gainesville Regional championship game against Ohio State. The accolades don’t stop there though, in her UF career Ocasio had 71 wins in the circle and as a hitter scored 86 runs with 10 home runs and 73 RBIs.

left it all on the field

She picked up some accolades this year as well including 2018 NFCA All-Southeast Region First Team, 2018 All-SEC First Team, 2018 SEC All-Tournament Team, and was SEC Pitcher of the Week – May 7. Ocasio was also a top-three finalist for the USA Softball Player of the Year award in 2016.

Ocasio will soon be playing for the Chicago Bandits in the National Pro Fastpitch League. She was drafted 10th overall in the second round.

Senior Kayli Kvistad has had a monster career at Florida. In her four years with the Gators, she had 114 runs, 32 home runs, and 193 RBIs. She became the first UF player to earn Academic All-American honors in back-to-back seasons since Michelle Moultrie (2011-12) and became the ninth UF softball player to earn Academic All-American honors. She also picked up some accolades including 2018 CoSIDA Academic All-District, 2017 All-SEC First Team, 2017 NFCA Third Team All-American, 2017 NFCA All-Southeast Region Second Team, and 2017 SEC Player of the Week – April 25.

However, Kvistad has not only been a monster on the diamond but also in the classroom. She was named a top 10 finalist for the Senior CLASS Award which honors student-athletes who have notable achievements in four areas: community, classroom, character, and competition.

Last, but not least, senior Janell Wheaton had some extremely memorable moments this season. She had the game-winning walk with bases loaded to give Florida the comeback victory over Texas A&M in Game 1 of the Super Regional. In her career at Florida, she had 81 runs, 15 home runs, and 119 RBIs. She picked up a few accolades this season including 2018 NFCA All-Southeast Region Third Team, 2018 SEC All-Tournament Team, and 2018 SEC All-Defensive Team.

Much love to these seniors I’ve watched grow up and become amazing friends and people. I’ll miss watching you all incredibly but will love having you on the alumni side! @janell_wheaton @nicoleddewitt23 @kaylikvistad21 @ALESHIAOCASIO https://t.co/wykJTEOsCB

No matter where they are, they will always know what it means to be a Gator. 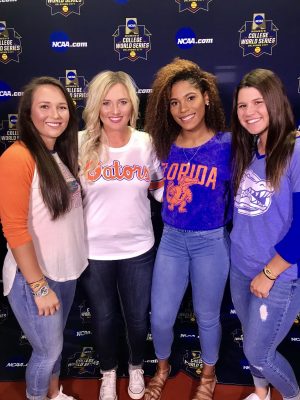 Courtney Mims is a junior telecommunications major at the University of Florida. She enjoys covering all Gator sports and drinking gallons of Starbucks coffee while doing so.
Previous Billy Donovan Speaks To Gator Baseball; Will Return To Coach Thunder
Next Golden State Warriors Run Away with NBA Finals Game 2 in Victory Over Cleveland