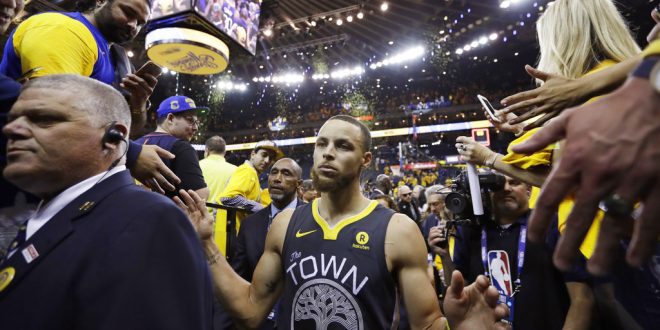 It’s a game that would be for redemption and revenge. For the Cleveland Cavaliers, this was more than just another Game 2. However, the Golden State Warriors would deny Cleveland their moment. The Warriors would win in a 122-103 battle, taking the lead in the NBA Finals.

Dubs take Game 2 to bring the series to 2-0! pic.twitter.com/OOPiBFHc6I

If you are to sum up this victory in one word, it would be “historic.” Why historic? Just ask Stephen Curry and his nine three-pointers. With this feat in Game 2, Curry now holds the record for most triples in an NBA Finals game.

Stephen Curry has hit a playoff career-high nine three-pointers (9-of-17 3FG) and has a game-high 33 points.

While history was made, the Warriors would silence The King for one game with a strong defensive outing and an offensive overload too great for Cleveland. Curry would put up 33 points, eight assists and seven rebounds. After the game, Curry would discuss how the team is putting their focus on the offensive side of the ball.

Warriors’ small forward Kevin Durant would also come to play in Game 2. Helping with 26 points, nine rebounds, seven assists and two blocks, Cleveland was just unable to counter back. Klay Thompson would also leave his stamp on the victory with 20 points and two rebounds. Following the game, Thompson would talk about the extreme focus that the Warriors are heading into Game 3 with.

In an unusual playoff performance from Cleveland’s ace LeBron James, The King would only score 29 points, 13 assists and nine rebounds. Kevin Love would also make his presence felt in Oakland, putting up 22 points and 10 rebounds. The performances were just not enough to combat Golden State’s high-powered offense.

With Games 3 and 4 taking place in Cleveland, James and Love are preparing to be laser-focused when the series goes home to The Q.

Despite the loss, James would make a little bit of history for himself, moving up to the second-most points in NBA Finals history, surpassing Kareem Abdul-Jabbar with 1,327 career points in The Finals.

Golden State will look to continue the offensive flurry with Game 3 on Wednesday, but Cleveland will be looking to make the biggest statement possible when they return home.

Cleveland is down 0-2. They now go home for Game 3 against the Warriors on Wednesday night. That matchup takes place at the Quicken Loans Arena in Cleveland, Ohio. Furthermore, ESPN 98.1 FM – 850 AM WRUF will have live coverage of the game beginning at 8 p.m. Finally, stay with WRUF.com for more on the NBA Finals as the series progresses.