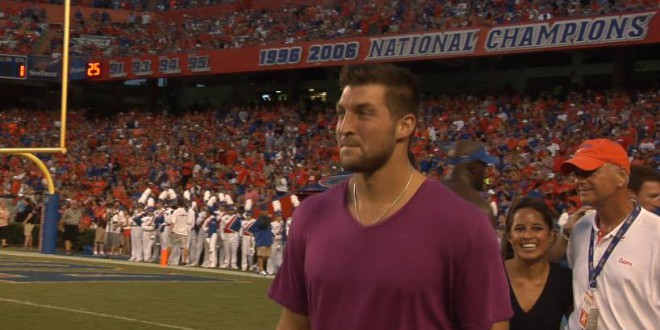 Tim Tebow takes the field to watch the SEC matchup.

Fans of Florida football will have another event to look forward to on October 6th when the Gators face LSU.

On Tuesday, the program announced over 100 members from the 2008 National Championship squad will be invited and honored at halftime.

A day later, Florida named Tim Tebow as the sixth member of their illustrious Ring of Honor, with the induction taking place during the game against LSU.

Tebow’s reaction to the news

In a statement released by the University Athletic Association on Wednesday, Tebow shared his thoughts on being recognized so highly by the program.

“I am so humbled and thankful to be able to receive this blessing, being inducted into the Ring of Honor,” Tebow said. “I know in my heart that I truly couldn’t have done it without amazing coaches and teammates who loved and sacrificed for each other so that we could accomplish our goals.”

The two-time national champion also thanked supporters of the Gators and ended his statement with a signature chant.

“Loving Florida wasn’t just something I did for four years, but it has been a lifelong passion,” Tebow continued. “I want to thank the University of Florida and all the fans for making Gator Nation so special. I was born a Gator, I played as a Gator, and I’ll always be a Gator! God Bless and Go Gators!”

His accomplishments at Florida

Along with winning two national championships in 2006 and 2008, Tebow had numerous personal accolades in college.

In 2007, the Gators quarterback became the first sophomore to win the Heisman Trophy. That same year, Tebow won the Davey O’Brien National Quarterback Award and the Maxwell Award.

During his three years as a starter for Florida, Tebow passed for over 9,000 yards and threw 88 touchdowns. On the ground, the dual-threat play-maker also ran for nearly 3,000 yards and 57 touchdowns.

What lies ahead for Tebow

Before Florida inducts Tebow into the Ring of Honor, he will continue to play baseball for Double-A Binghamton of the Mets organization. Tebow will be playing in the Eastern League All-Star Game on July 11th, with first pitch scheduled for 7 p.m.

Previous FIFA World Cup Preview: Croatia and England Fight For Surprise Spot in the Final
Next Wimbledon: Nadal Through, Federer Crashes Out in Quarterfinals