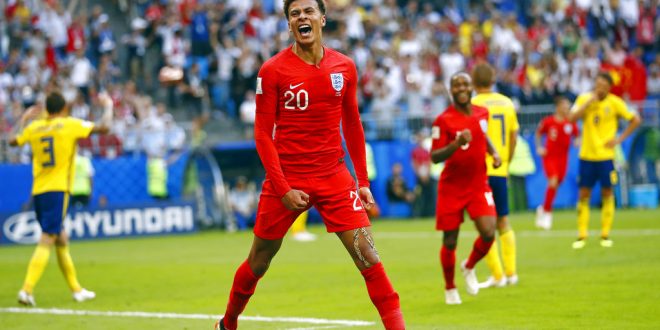 England's Dele Alli celebrates after scoring his side's second goal during the quarterfinal match between Sweden and England at the 2018 soccer World Cup in the Samara Arena, in Samara, Russia, Saturday, July 7, 2018. (AP Photo/Matthias Schrader)

One team has already been confirmed for the Sunday’s FIFA World Cup final, France. They were a favorite to get there.

One team is yet to book there spot, either Croatia or England. Neither of them were favorites to get there.

But alas, these are the two teams that have taken advantage of how their bracket has opened up, after the eliminations of Germany in the group stage and of Spain in the Round of 16 against Russia. Both Croatia and England looked strong in group play before enduring nervy games and penalties in these knockout stages.

Both have the opportunity of a lifetime in front of them. England’s only ever World Cup trophy came at home in 1966, and a win would raise the “It’s Coming Home!” chants to a fever pitch. Croatia meanwhile, have never even reached a World Cup final, with their best finish as an independent nation coming 1998, where they finished third.

Differing But Influential No. 10’s

Despite different responsibilities and styles of play, the two players who don the No. 10 jerseys in this match will be highly influential: Croatia’s Luka Modric and England’s Raheem Sterling.

Modric has been widely regarded as one of the best all-around midfielders in the world. He’s the heart and soul of this impressive Croatian side, and has been an engine for Real Madrid in their journey to three consecutive Champions League titles.

To start the tournament against Nigeria, manager Zlatko Dalic deployed Modric alongside Barcelona midfielder Ivan Rakitic in a defensive midfield double pivot. Croatia struggled to get going until late in the match, as the lack of a natural, ball-winning defensive midfielder meant Modric and Rakitic sat deeper and looked to play long balls to the front four though.

They reverted back to this formation for the quarterfinal against Russia, but expect them to use a 4-3-3 in possession against England like they did in the games in between the Nigeria and Russia ones.

Doing this pushes both Rakitic and especially Modric up the pitch, with Modric playing more like a classic No. 10. He can bring the ball up from midfield. He can spring counterattacks with balls sent out wide to Perisic and Rebic, or combine with Mandzukic and the other midfielders in the center of the pitch. And when given space, he has a rocket of right foot to shoot from distance.

Sterling’s role is a bit different than Modric’s, but he plays just an integral of a part for his team.

The Manchester City forward starts higher up the pitch, in a second striker role just behind Harry Kane. In Gareth Southgates 3-5-2, the movement that Sterling provides is essential.

He drops back from the high up position, coming back to gather the ball and make darting runs forward. Or, he can combine with attacking midfielders Dele Alli and Jesse Lingard to pass through the lines, with Lingard’s and Alli’s runs from deeper positions opening pockets of space for shots.

This was best evidenced in Lingard’s screamer against Panama and shows the importance of Sterling despite his criticisms. His finishing leaves a lot to be desired at times, but his intelligent runs, link up play, and positioning allow others to put away chances, even if he himself isn’t.

While such an emphasis on dead ball situations can take away from protagonistic, attacking football, the importance of set pieces is impossible to overstate at this World Cup. Out of 158 goals so far this tournament, 69 of them (43%) have come from set pieces.

And no team has had more success from set pieces than England has, bagging 8 goals from dead ball situations. In fact, all six of Golden Boot leader Harry Kane’s goals in Russia have come from set pieces including three from penalties.

Harry Kane draws the penalty and buries it to put England up 1-0 on Colombia. pic.twitter.com/aQmOqIyTJU

This is an area the Three Lions will look to exploit against Croatia. From the three goals the Croatians have allowed in the knockout stages, two of them have come from set pieces, including a Mario Fernandes equalizer on a header from a free kick in extra time in the game against Russia.

However, if the game goes to the ultimate competition of set pieces, penalties, that’s where the Croatians may have the advantage. Both of their knockout games, against Denmark and Russia, have been decided via kicks from the spot. Goalkeeper Danijel Subasic has come up huge on both occasions, while the takers have been calm from the spot, with Rakitic bagging the game winning penalties in each game.

England got the penalties monkey off their back when they defeated Colombia in the Round of 16 in that fashion, but history still isn’t on their side in those situations, and they’d be up against a team who has to feel comfortable in that most uncomfortable of circumstances.