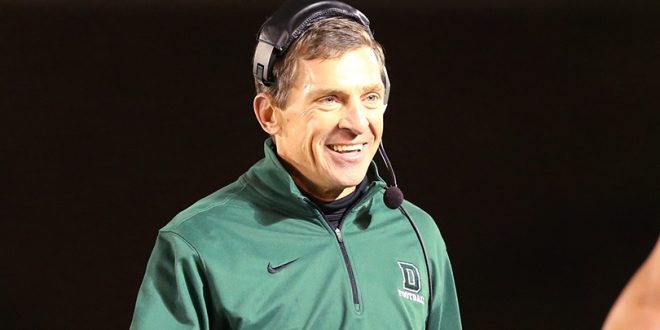 Head Coach of Dartmouth football Buddy Teevens had a big presence on Steve Spurrier’s staff. He went from being the running backs coach, to passing game coordinator, to assistant offensive coordinator and tight ends coach all in the span of three years. Now, he has some other former Gator staff joining the Big Green and even a former Gator player.

McCorkle was a talented defensive back at the University of Florida from 1992 to 1996. He played on four SEC conference championship teams, played in four bowl games and a national title game. He was awarded with the title of Florida’s special teams player-of-the-year twice. McCorkle graduated from the university in 1996. He even graduated with Florida’s single-season and career records for blocked punts.

Blackshear also had a fantastic playing career at Florida from 1996 to 1999. He was an offensive lineman who played in four bowl games including the 1997 Sugar Bowl when the Gators won a national championship. He earned second-team All-Southeastern Conference as a senior while being awarded the Fergie Ferguson Award as the senior with the most leadership, character and courage.

Here’s what Teeven had to say about both of those guys:

Former Florida QB on the Roster

Jake Allen decided after Florida Spring ball that he would transfer to Dartmouth College in the Fall. Allen was one of four quarterbacks at UF and now leaves Feleipe Franks, Kyle Trask and newcomer Emory Jones to battle it out at the position.

Happy to announce that I will be transferring to Dartmouth College. Excited about the opportunity it brings academically as well as athletically. Go Big Green! @dartmouth @DartFootball #IvyLeague

Coach Teevens said everything fell into place when getting Allen. He always had an interest in Ivy League Schools and it seemed like a perfect fit for the former Florida quarterback.

Listen to the whole interview with Buddy Teeven right here.

Also, check out Sportscene with Steve Russell for interviews with other coaches and more.

Courtney Mims is a junior telecommunications major at the University of Florida. She enjoys covering all Gator sports and drinking gallons of Starbucks coffee while doing so.
Previous Friday Night Lights Camp Takes Over Florida Gators Campus
Next Training Camp Update: Baker Mayfield