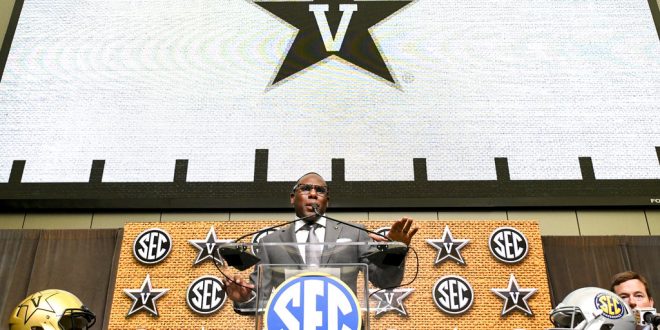 The SEC hasn’t been kind to the Vanderbilt football program in recent seasons, as well as their history.

They’ve never reigned in the SEC in school history, so it’s fair to say their on-field issues stem much further than current head coach Derek Mason.

Mason hasn’t done much to help his case throughout his five-year tenure though.

His overall record of 18-31 (6-26 in the SEC) is nothing short of disappointing. To put that in some perspective, his predecessor, James Franklin, was at the helm for 24 wins in just three seasons.

Mason actually drew quite a few positives from the way his team finished last season at his SEC Media Day.

There’s no question that Mason has gotten to work this offseason. He’s hungry to get another crack at improving this Commodores team.

Mason was particularly excited about the growth senior quarterback Kyle Shurmur has made under his watch.

“I truly believe Kyle Shurmur is one of the most improved quarterbacks and one of the most dynamic passers in this conference that people aren’t talking about,” Mason said. “And thats fine, I don’t need people to talk about Kyle Shurmur. I know and understand his pedigree, and I’ve seen seen his development from having to play as a true freshman to where he is now.”

There’s definitely some truth to Mason’s analysis of his quarterback.

Shurmur has increased his completion percentage, quarterback rating and passing touchdowns each season under center.

Mason also said he can now depend on a deeper offensive line to protect the senior quarterback.

The fifth-year head coach is well aware that the SEC is a quarterback driven league. The Commodores will benefit from having experienced guys in the trenches, too.

He spoke with same confidence and excitement about the Commodores’ depth at the skill positions and drew special praise for junior receiver Kalija Lipscomb.

Continuing the Added Depth on Defense

Mason continued to draw attention to his team’s improvement in depth. This time on the defensive side.

“For the first time in my tenure I have guys that can play up front,” he said. “I’ve got four in a three-man-front that I can waive through, and that’s important.”

While he admitted that his outside linebackers will need to be better in 2018, Mason wasn’t shy about making a bold comparison about one of his cornerbacks.

“JoeJuan Williams is probably the best corner I’ve coached outside of Richard Sherman,” Mason said. “When you’re 6-feet 3-inches tall, extremely athletic and can cover, it means something.”

“We’ve got more depth and more talent on both sides of the ball than we’ve ever had.”

The Commodores will desperately need to improve this side of the ball if they want success in 2018.

They ranked around the middle of the SEC in most offensive categories — except rushing — but they allowed 31.3 points per game to opponents in 2017.

It’s improvements on defense that will truly help Mason improve his team’s record and play.

Vanderbilt’s head coach has the desire and the passion to lead this team, and now it’s up to his players to prove his praises to be true.

Sports media and management student at the University of Florida. Content creator for ESPN 98.1 FM/ 850 AM WRUF.
@TheEdgarChavero
Previous Buccaneers Start Training Camp, Ready for Fitzpatrick to Fill in For Start of Season
Next Justin Watkins Indicates Leaving UF