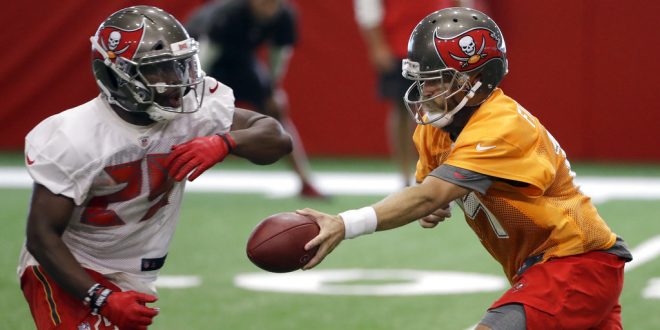 Buccaneers Start Training Camp, Ready for Fitzpatrick to Fill in For Start of Season

The Tampa Bay Buccaneers reported Wednesday after a rough offseason in which their quarterback was suspended three games.

The players spoke publicly for the first time Wednesday, reaffirming their faith in backup Ryan Fitzpatrick to get them through the start of the year. Fitzpatrick was also confirmed as the season opening starter by Dirk Koetter.

Fitzpatrick Went Two and One Last Season As a Starter

The players in the locker room are familiar with Fitzpatrick and don’t expect a drop off during these first three weeks. Mike Evans is grateful to have an experienced backup.

Winston has overshadowed Dirk Koetter’s job security this summer, after a massively disappointing 2017. He won’t commit to Jameis Winston as the starter in the fourth game. Koetter says he has to that spot back through camp and the preseason.

Winston says he understands any disappointments the fans have and is ready to get back to work.

Winston is set to miss season opener at New Orleans, as well as home games against Philadelphia and Pittsburgh.

New Names in the Bay

They’ll form a tough defensive line to go alongside Gerald McCoy. Beau Allen, another former Eagle, along with Vinny Curry, was also signed to the defensive line.

The Buc’s defense ranked 23rd against the run last season and was dead last in sacks in the NFL, with only 22. Former high draft pick Noah Spence, is also fully healthy after being injured most of 2017.

Running Back Up for Grabs

Peyton Barber, Charles Sims and Jacquizz Rodgers will be competing for touches along with USC rookie Ronald Jones. The second round-draft pick is speculated to be the main competitor with Barber once camp winds down, for the starting spot.

Barber impressed the staff over the last five games of 2017 with 335 rushing yards on 78 carries and 12 catches that totaled 83 yards.

Running back and defensive line are the most intriguing positions on the roster, but everything is overshadowed by Winston and his looming suspension during the first week of Buccaneer’s camp.