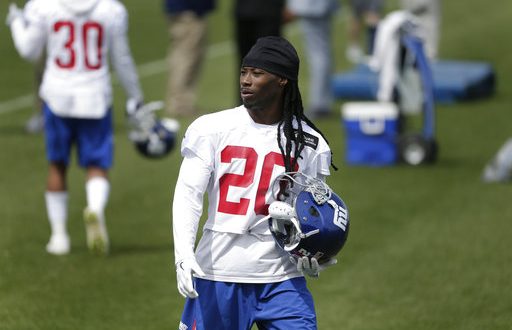 New York Giants cornerback Janoris Jenkins has spoken out publicly for the first time since the death of his close friend and the aggravated manslaughter charge against his brother that followed earlier this summer.

Although this incident was very tough for Jenkins to deal with, he is ready to put that off to the side and focus on his job.

He says football is more important to him right now.

He wants to make sure this off-the-field distraction does not take anything away from his on-field performance. During a news conference at training camp, he said he will not discuss any details of the case.

Back in June, a body was discovered in Jenkins’ home. Police determined the body was that of Roosevelt “Trypps Beatz” Rene, who was a close friend of Jenkins.

Jenkins’ brother, William, was arrested and charged with manslaughter the next day. Both of them were living in Jenoris Jenkins’ home during the time of the incident, while Jenoris Jenkins himself was in Florida.

“I haven’t talked to [my brother], to be honest,” Jenkins said. “But I will to see where his head was at. As far as that, I’ll just leave that off the field.”

“It truly hurts my heart to know he has passed away,” Jenkins said.

Despite this, though, he is choosing to put all of his time into football and keep himself busy with his work.

Jenkins returned to the area where this happened for the first time last week for the start of training camp.

Throughout this whole time, Jenoris Jenkins has been trying to go about everything in a professional manner.

“It’s difficult, but at the end of the day you have to be a pro,” he said. “Things going to happen in life. Some things you can’t control. It’s just one of those situations.”

This was not the first run-in with the law William Jenkins Jr. has had. In 2006 and 2011, he was arrested on drug charges, according to New York state department of corrections records.