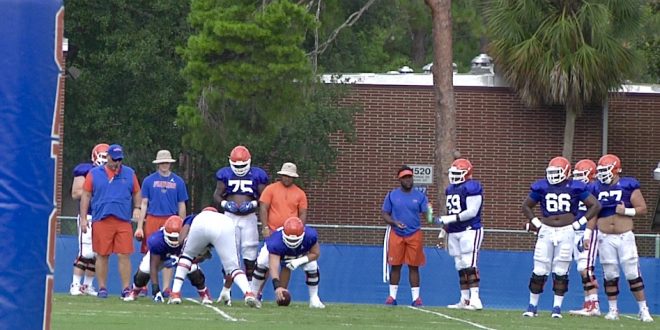 The offensive line has been under scrutiny for the past few season at Florida. So, a lot of eyes will be on the offensive line during the first game, to see if coach Mullen’s staff has improved the position. In a press conference Wednesday, Mullen mention that on the offensive live the center position is the most wide open. The OL talked with the media Thursday and mentioned that Mullen and the offensive line coach, John Hevesy, have been trying to build up their confidence.

Mullen said that he really likes how the first string OL guys are performing, but that he wishes the back ups where farther along in training camp. He also mentioned how the offense in general needs to be showing more confidence. Offensive Lineman, Fred Johnson, thinks that the team is moving in a good direction.

The offensive line has been praising the running back position. Mullen has even said that he wants to have more of a running offense. Offensive lineman, Tyler Jordan, says the OL is embracing the task.

One of the running backs that has been impressing the whole team in the weight room is Dameon Pierce. Fred Johnson, was shocked when he saw Pierce squatting.