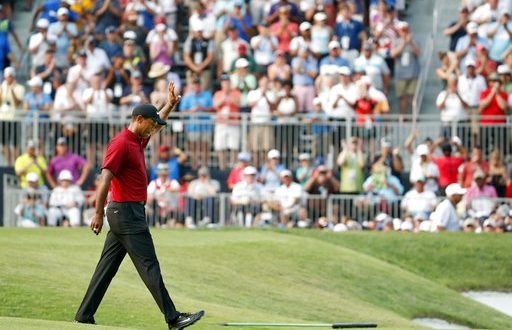 Tiger Woods waves as he walks off the 18th green during the final round of the PGA Championship golf tournament at Bellerive Country Club, Sunday, Aug. 12, 2018, in St. Louis. (AP Photo/Jeff Roberson)

Tiger Woods is having himself a pretty good year. However, Woods is about to attempt something he hasn’t done in over five years: play in three consecutive tournaments.

Woods is on his “real” comeback tour. After multiple surgeries and failed comeback attempts, he looks a little like his old self again. Back before his first event in January, Woods was ranked 656th in the Official World Golf Ranking. He’s now ranked 26th in the world. While he hasn’t won any event this year, he’s certainly come close. He has five top-10 finishes, including two 2nd place finishes. His last showing was arguably his best of the year, claiming a solo-second place finish with a score of 64 at the PGA Championship.

His comeback has been a fantastic story in the world of golf this year.

For the 42-year-old Woods, this is the most golf he’s played in years. He’s on pace to play 18 events for the first time since 2012. Finding a “balance” in his practice and rehab has been a challenge for him all year.

As Woods prepares to play three events in three consecutive weeks, he says that he’s felt better about his game and his health as the year has went on. For him, it’s all about pacing himself.

Woods hasn’t competed in the FedEx Cup Playoffs since 2013. Even though he hasn’t won an event this year, his tournament success has been good enough to put him at 20th in the FedEx Cup rankings. He is the only golfer to win the FedEx Cup title multiple times, and he’s looking for a third title to close out his redemptive season.

“I feel my next wins are coming soon,” Woods said. “How soon, I don’t know, but I’m putting myself there in tournaments now. I’ve done it two of the last three tournaments I’ve played in and they were big events, so I’m not that far away from getting it done.”

Woods knows that a key to his game is driving the ball well.

Woods will compete in his first event The Northern Trust at Ridgewood Country Club. He will tee off on Thursday morning at 7:54 a.m. ET alongside Tommy Fleetwood and Marc Leishman.