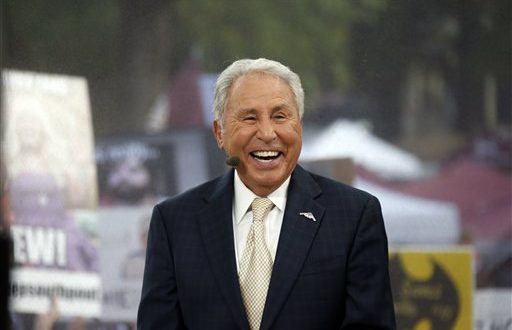 Fan favorite and former coach Lee Corso is returning for the 31st season of College GameDay on ESPN. The 83-year-old analyst shares his thoughts as he previews the upcoming college football season.

The SEC is often associated with a dominant Alabama team at the top. Corso suggests that it will come down to Alabama and Georgia in the division championship.

“I think Alabama will probably play Georgia in the SEC title game and I kind of like leaning towards Georgia and the reason is last year they lost a heartbreaker to Alabama,” Corso said. “I think playing in the Georgia Dome, I think I give Georgia a slight advantage over them.”

The 2018 college football season will feature some new faces in new places. Starting with the team close to home, Florida is now being led by former Mississippi State coach Dan Mullen. Corso said Mullen is a terrific hire for the Gators. Mullen led Mississippi State to seven bowl games in nine seasons.

Back in December, Jimbo Fisher accepted the head coach job at Texas A&M after resigning from Florida State. Fisher and the Aggies are currently dealing with potential NCAA violations.

On the other side of things, Willie Taggart replaced Fisher at Florida State. Corso said the key move for Taggart so far has been bringing back Bowden and returning traditions. He felt Fisher didn’t acknowledge those traditions throughout his time with the university.

Teams Flying Under the Radar

As for his College GameDay experience, Corso said he has a lot of pride in what he does every day.

“It’s like stealing. I get up in the morning on Thursday and I fly first class to the game. I stay in a first class hotel, I eat first class meals and I talk football for about an hour and I fly back first class and I see a great game and they pay me,” Corso said. “That’s stealing. That’s not a job, that’s a privilege.”

College GameDay will kick off the season on Sept. 1 in South Bend, Indiana, as Notre Dame hosts Michigan.

Born and raised at the ballpark! Typically quiet- until it comes to sports. I'm a South Florida native with a passion for baseball nearly as strong as my faith. Grew up in garnet + gold, turned out sporting orange + blue. Likely to be found with a camera. And yes, I take food pictures.
@victoriarossman
Previous Tiger Woods Ready for Three Straight Tournaments
Next Gainesville High Set to Kickoff 2018 Season Against Columbia