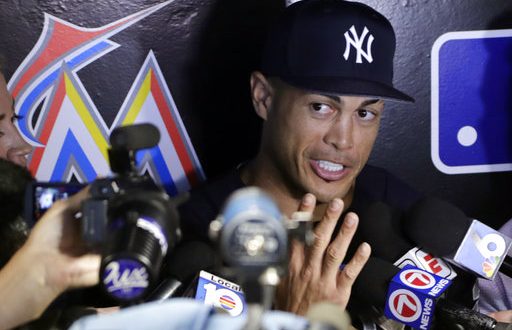 New York Yankees left fielder Giancarlo Stanton talks with the news media before a baseball game against the Miami Marlins, Tuesday, Aug. 21, 2018, in Miami. Stanton says it's weird to return to Miami, where he played his first eight major league season and will now try to help the Yankees beat the Marlins. (AP Photo/Lynne Sladky)

First he waved his two fingers proudly in the air, then Giancarlo Stanton pounded his heart in appreciation of the standing ovation he got in his return to Miami.

Stanton proceeded to smack a sharp single into left field in his first plate appearance of the game. In typical Stanton fashion, the big man also struck out three times going 2-6 with a double in the Yankees 2-1 win over the Fish.

While most of the 26,275 at Marlins Park seemed to be the usual flurry of Yankee fans that flock to the stadium when they’re in Miami, the warm reception speaks volumes of Stanton’s legacy down in South Florida.

Just last offseason, the All-Star slugger was shipped to New York in the wake of yet another organizational rebuild for the Fish.

Stanton waived a no-trade clause to join the new-aged Bronx Bombers in just the third year of his 13-year, $325 million contract.

Tuesday night showed that there seems to be no hard feelings amongst Stanton, the Marlins and their fans.

He’s managed to put behind a slow start and is almost quietly living up to the expectations that the Yankees had for him. Stanton’s slashing .285/.353/.542 with 32 home runs in the heart of a Yankee lineup that’s been without a few key cogs for parts of the season.

But the Marlins have faired differently in their first year without Stanton. At 50-77 they sit in the basement of the NL East.

Stanton said that he doesn’t want to see the Marlins struggle.

“Hopefully it’ll start to happen. But everyone always associates me with negativity there,” Stanton said. “I’m sick of that, and done with that. This is a great city. It’s got great potential. I hope it switches.”

Stanton can no longer help the Marlins on the field, but it sure is nice to see the former Fish show love to his former club.

Stanton and the Yankees had to wait until the twelfth inning to celebrate a 2-1 win, yet one of his teammates had to leave the game early.

Yankees’ All-Star closer Aroldis Chapman was removed in the twelfth after throwing just six pitches. The hard-throwing left hander has dealt with left-knee tendinitis all season. After the game, Chapman said the pain he felt was “more than usual.”

Stanton and the Yankees will play the second game of the two-game series against the Marlins tonight at 7:10 p.m ET. Lance Lynn will take the ball for the Yankees against Trevor Richards.

As for Giancarlo, he’d surely like to mark his trip back to Miami with one of his famous tape measure home runs.

It’s a sight that even Marlins fans might want to see one more time even if Stanton does it in pinstripes.

Sports media and management student at the University of Florida. Content creator for ESPN 98.1 FM/ 850 AM WRUF.
@TheEdgarChavero
Previous Gator Football: From Walk-On to Scholarship
Next Tiger Woods Ready for Three Straight Tournaments 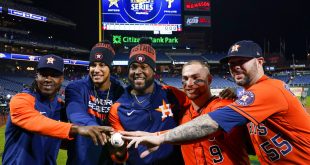