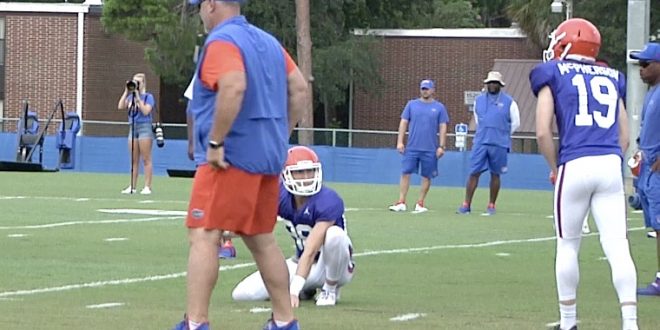 Throughout training camp, coach Dan Mullen has put a huge emphasis on the Gators special teams unit. Just this week, Mullen awarded scholarships to two players (R.J. Raymond and Nick Villano) that are big influences on special teams. During training camp there has also been some debate on who will be the starting punter and kicker.

In a press conference Thursday, Mullen emphasized that the punt team is the most important, because only “the best of the best” will play there. Mullen also mentioned that there are benefits to being on the punt team.

Based on how much Mullen has highlighted the special teams, it’s safe to say Gators fans can expect a dominate unit.

Townsend says he was averaging about 44.8 yards a punt during training camp, but he believes he can improve.

@tommy_townsend Thank you so much for taking the time to pose for a photo with my daughter today at Fan Day. Third year in a row our favorite Gator is the punter and their name is always Townsend!! See you in 2 weeks at The Swamp. Good luck. pic.twitter.com/L4QbeI0pSm

Meanwhile, the starting kicker has yet to be named, it’s between 5th year senior Jorge Powell and freshman Evan McPherson. In training camp the kicking game has been pretty similar between the pair.

Being a 5th year senior does give Powell the experience advantage. Powell also mentioned that the competition has been good for the both of them.

Check out the special teams unit on 9/1/18 as the Gators host Charleston Southern in the swamp at 7:30pm.