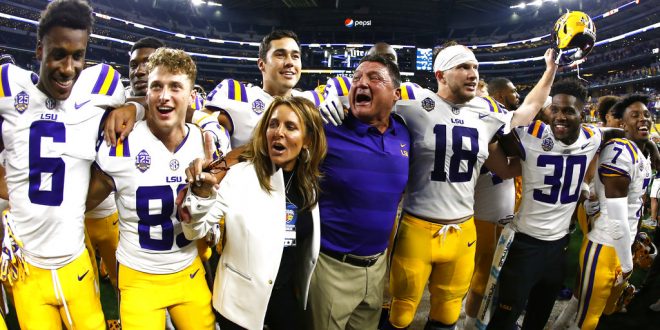 The LSU Tigers and Southeastern Louisiana Lions will square off on Saturday in Week 2 of the college football season. After stomping the Miami Hurricanes in Week 1, Ed Orgeron’s Tigers are looking forward to their next challenge.

The Hurricanes had no answer for the Tigers’ rushing scheme. Senior running back Nick Brossette had a big day, rushing for 125 yards on 22 attempts, average 5.7 yards per rush.

The Tigers were less successful in the air, however, as junior quarterback Joe Burrow completed 11-of-24 passes for 140 yards with no touchdowns. Orgeron said that Burrow will still remain the starter, but backup quarterback Myles Brennan will get his opportunity in the future.

“Joe did a good job for us, but there are still things he has to improve,” Orgeron said. “He knows that. I’m looking forward to playing Myles, too. I can’t wait until he gets in there. I think he’ll do a great job.”

One of the key factors in LSU’s win was their defense. The Tigers held the Hurricanes to three points through three quarters and forced Miami quarterback Malik Rosier to throw two interceptions. Miami was virtually no threat on the ground either, rushing for a total of 83 yards.

Orgeron specifically mentioned junior quarterback Chason Virgil and junior receiver Juwan Petit-Frere as threats on the Lions’ offense. They both had big games in a Week 1 loss against Louisiana-Monroe.

As Orgeron mentioned, Virgil threw for 358 yards and four touchdowns. One of his frequent targets on the night, Petit-Frere, caught five for 148 yards and two touchdowns.

Orgeron did the same for the defense, pointing out the Lions players who performed well in the Week 1 loss.

This time, Orgeron pointed out senior linebacker Tamarcus Russell and junior safety Matthew Wright as the key performers for the defense.

LSU will host Southeastern Louisiana this Saturday at 7 p.m. The game will be televised on ESPN2.