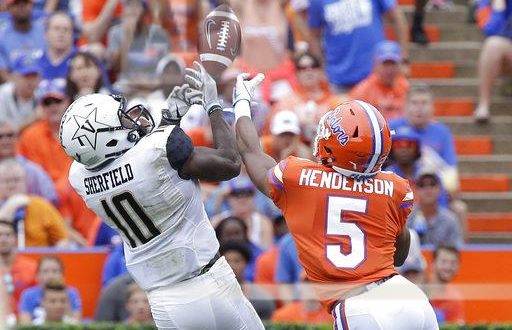 When the Florida Gators take the field on Saturday night a 31-year winning streak will be on the line. However, the Gators focus remains on this year, and not the past. Florida defensive back Marco Wilson said he knows about the streak but isn’t thinking about it.

“I’m definitely aware of (the streak) but that’s not really what we’re focused on,” Wilson said. “Most of those games we didn’t play in so it doesn’t matter.”

What is the Florida defense focusing on? Simple, improving on last week’s performance. Last week the offense lit up the scoreboard, but the Florida defense set the tone in their season-opening win over Charleston Southern. Florida held Charleston Southern scoreless in the first half and to just six points and 225 yards of total offense. Cornerback CJ Henderson liked the tone the Gators set on defense.

“We were fast, physical and aggressive just like we expected and we got a lot of three and outs like we wanted,” Henderson said.

But after last week’s impressive performance the defense knows they need to improve this week. Both Henderson and Wilson said that they have focused on tackling better as a team this week.

As impressive as the season-opening win was, they know that Kentucky will present a different challenge this week. The Wildcats started their season last week with a 35-20 win over Central Michigan. Kentucky was led by preseason All-SEC first-team running back Benny Snell. He rushed for 125 yards on 20 attempts and two touchdowns last weekend. Snell has the full attention of defensive coordinator Todd Grantham.

“They’re really physical running the ball. They got a premiere back in this league. Their offensive line does a really good job of getting movement at the point of attack,” Grantham said.

Kentucky’s run game wasn’t the only thing that jumped out in the film to the Gators. The Wildcats veteran passing attack has also caught the eye of Florida’s Marco Wilson.

Florida and Kentucky will kickoff Saturday night in the Swamp at 7:30 on SEC Network. Our coverage will begin at 3:30 on WRUF radio.